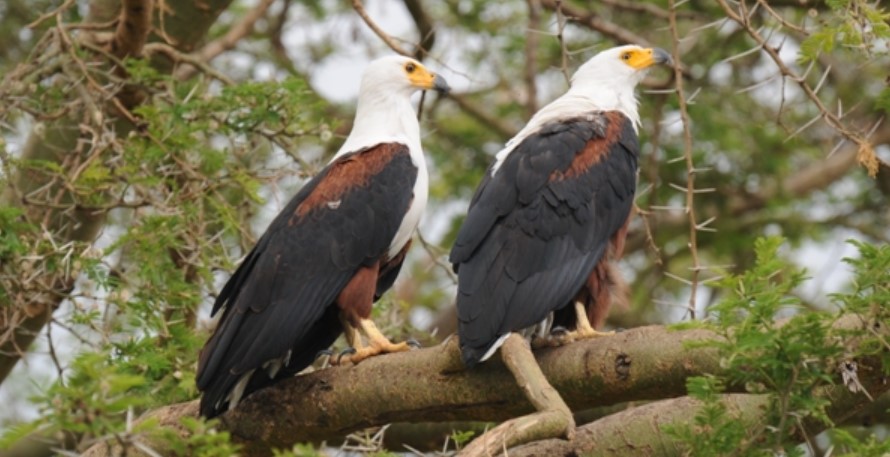 The park was classified as an Important Birding Area (IBA) by Birding International and it is the park that offers the largest bird checklist more than any protected area in East Africa given the fact that it is home to over 600 different bird species, of which several are regarded special and unique in the East African region. Central African bird species are also common in the park alongside the Albertine rift species and migratory species. The park established an observatory area in 1997. It was set aside majorly to observe and study resident and migratory bird species in the park.

This famous area is a must-see wildlife destination while on an African Safari. This is mainly because it is among the top habitats of the big African Five hence one of the most perfect spots for big game viewing. Despite being among the best game viewing spots in the region, the Kasenyi plains is a birder’s paradise given the numerous bird species. The vegetation of the area is dominated by the savannah grasslands dotted with a few spaced trees. Some of the bird species that should be included on any birder’s checklist while in the Kasenyi Plains include; Hooded Vulture, Palm-nut Vulture, Brown snake Eagle, Lappet-faced Vulture, Bateleur, Martial Eagle, African Crake, African wattled Plover, Crowned Plover, Black-Bellied Bustard, Grey Kestrel, Hooded Vulture, Ruppell’s Griffon vulture, Walhberg’s Eagle, FLappet Lark, White-tailed Lark, Kittlitz’s Plover, Senegal Plover, Temminck’s Courser, Rufous napped Lark, Black-Headed Gonolek, Zitting Cisticola, Brown-backed Scrub-Robin, Croaking Cisticola, Black-crowned Tchagra, Grey Backed Fiscal, Grey-capped Warbler, Back- Lored Babbler among others.

The forest is a habitat for over 60 bird species and is found in the Kicwamba escarpment in the western rift valley. The Marabigambo Forest covers a vast part of Queen Elizabeth National Park and a birding experience in this area which is usually carried out by trekking exposes birders to lakes like Kamunzuku and Nyamusingire which attract certain bird species and different primate species like chimpanzees among others. The different bird species usually seen around Marabigambo Forest include; the Marsh Tchagra, Brubru, Black Bishop, Sulphur-breasted Bush-Shrike, Black Bee-Eater, Barbets, Red-Shouldered Cuckoo-shrike, Blue-Throated Roller, Honeyguide Greenbul, Green Crombec, Black and White Shrike Flycatcher, Croaking Cisticola, Blue-shouldered Robin-Chat, Brown-eared Woodpecker, Chestnut-Wattle-eye, African Paradise flycatcher, Broad-Tailed Warbler, Western Black-headed Oriole, Dark- Capped Warbler among others.

The area is characterized by several small lakes such as lake Munyanyange and swamps which make perfect habitats for the different bird species in the area. The bird species found in the area include; the popular Lesser and Greater Flamingos, Avocet, Montagu’s Harrier, Common Greenshank, Curlew Sandpiper, Southern Red Bishop, African Moustached Warbler, Broad-tailed Warbler, Little Stint, Pallid Harrier, Gull-billed Tern, Eurasian Marsh Harrier, and a Croaking Cisticola among others.

The lake is known as the home of Waders which is another name for water birds. The Lake is an extension of Lake George. Commonly seen bird species around Lake Kikorongo include; the Saddle-billed Stork, African Jacana, Sacred Ibis, Shoebill, Common Squacco Heron, Knob-billed Duck, Black Brake, Papyrus Gonolek, Carruthers’s Cisticola, Yellow Wagtail, Lesser and Greater Swamp Warblers, and the White-winged Warblers.

The Katunguru Bridge Area is found where you cross the Kazinga channel from Kasese district to Rubirizi district. Beneath the Katunguru Bridge, exits a swamp which is a habitat for different bird species such as the Gull-billed Tern, Pink-backed Pelican, Malachite Kingfisher, Pied Kingfisher, Papyrus Gonolek, Carruther’s Cisticola, Lesser and Greater Swamp Warblers among others.

What essential items should tourists carry when going for Birding in Queen Elizabeth National Park?

All avid birders interested in ticking their bird checklists from Queen Elizabeth National Park should remember to carry a few essential items in order to ensure a rewarding birding experience in this particular Game park. These include; A pair of Binoculars, a tour guide, a Birding vest/ pack (Which helps you carry all your equipment comfortably), comfortable footwear, a Brimmed hat, Water Bottle, insect repellant, notebook, and pen among others

What is the best time to carry out Birding in Queen Elizabeth National Park?

First, bird watching in Queen Elizabeth National Park can be carried out throughout the year. The best time to visit the park and carry out birding is during the drier months of the year which are usually from late May to September and June to July. During the wet seasons, some roads and trails get slippery and impassable.

The park can be accessed by either Air or Road means of transportation. By air, one can book a flight from either Entebbe International Airport or Kajjansi Airstrip which will fly to one of the nearest airfields in Kasese and this takes at most one hour. By road, it takes roughly 7-8 hours from Kampala the capital city of Uganda to Fort portal and its 410 km.

Where to get accommodation in and around Queen Elizabeth National Park?

Some of the best accommodation Lodges for birders in Queen Elizabeth National Park include; Kyambura Game Lodge, Mweya Safari Lodge, Hippo Safari Lodge, and Ishasha Wilderness Camp for budget visitors, and Jacana Lodge among others