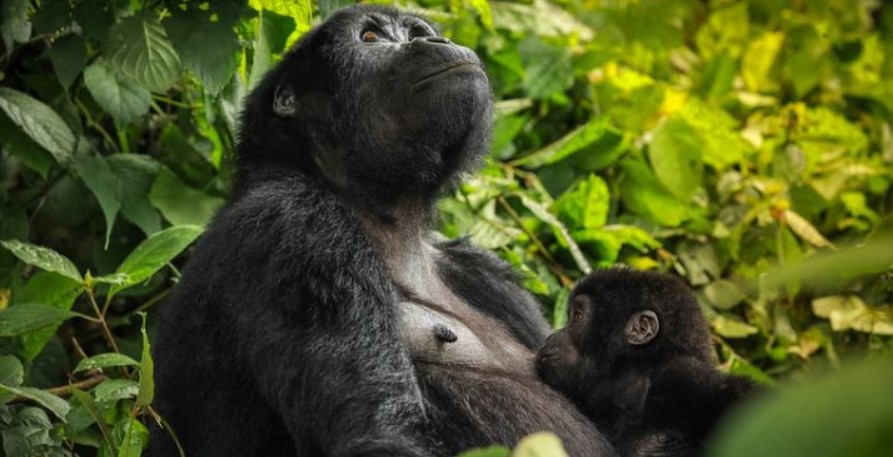 Gorilla trekking is defined as a hike to tropical forests to see the gorillas in their natural habitants since the mountain gorillas are the star tourist attraction in Bwindi impenetrable National park this makes gorilla trekking the most popular tourist activity in the park.

Bwindi Impenetrable National park is found in Kanungu District in the South Western part of Uganda and It is situated on 321square kilometers. This park contains both Afromontane and lowland forests. Bwindi has a tropical type of climate meaning that it can receive rainfall anytime of the day in the year. Bwindi Impenetrable is famous for the mountain gorillas thus making it a popular destination for gorilla trekking. There are over 400 mountain gorillas that are harbored in the forests of Bwindi. This therefore means that the park harbors more than half of the world’s remaining gorilla population in the world. Bwindi Impenetrable National park is further subdivided into four regions for easy accessibility an these are Buhoma region, Rushaga region, Nkuringo region and Ruhija region each of these regions has different gorilla families to be trekked.

Gorilla trekking in Bwindi happens in the four trekking regions of Bwindi where different habituated gorillas are being trekked. But before one goes on trekking the gorillas must have purchased a gorilla trekking permit which can be acquired from the UWA main offices and each permit costs 700dollars for the foreign non residents, 600dollars for the foreign residents and 250000shs for the East African residents. Not forgetting the minimum age allowed to trek the mountain gorillas in Bwindi is 15years and above. Some groups might start tracking the gorillas near the park offices while others will need to be driven to starting points in the other sectors. Gorilla trekking in Bwindi takes about two to eight hours depending on the gorilla family your trekking and once a particular gorilla family has been tracked a period of just an hour is given to the tourists with the gorillas. This is so because the gorillas might feel uncomfortable due to the visitor’s long stay and may get agitated by their presence. With this one hour tourists get to Learn more about the gorillas feeding habits, how they play and communicate thus knowing about their lifestyles and behaviors. Very early in the morning tourists wake up to shower up and get breakfast then head to the briefing at the park headquarters after the briefing they are being grouped into groups of eight since its by the rule of trekking that only a group of eight people are allowed to trek a particular gorilla group in the trekking sectors of Bwindi. Here are the trekking regions of Bwindi;

Ruhija sector. This region has four fully habituated gorillas and trekking starts very early in the morning after briefing of the do’s and don’ts. Ruhija sector is found in the Eastern part of the park. The following are the gorilla families found in this region; Bitukura gorilla family has a family size of 13 members headed by silverback Ndahura, Oruzogo gorilla family headed by silverback Bakwate has a family size of 17 individuals, Kyaguliro family group which is mainly used for Research has 10 members and lastly Mukiza gorilla group headed by silverback Mukiza has 10 members. Ruhija region has about 32 trekking permits available per day.

Gorilla trekking in Bwindi has rules and regulations governing it. These are normally read out to the trekkers before they embark on the hiking in the forest very early in the morning. During trekking the tourists together with the experienced tour guide who will be sharing information about each of the group members and the forest itself will be accompanied by two well trained armed rangers for security purposes in case. A team tracker goes ahead of the group to identify the location of the gorillas and then informs the guide on a radio call. Here is the list of the rules and regulations of gorilla trekking;

The best and perfect time for gorilla trekking in Bwindi National park.

Bwindi can be visited any time for gorilla trekking that one feels like. But since we all know it that this park has a tropical type of climates there are times which wont be with favorable conditions for gorilla trekking therefore we need to know when its best to visit for an easy gorilla trekking. During the months in between December to February and June to September this is regarded as the dry season in the park however its not guaranteed that it wont rain due to the nature of the climate Bwindi experiences. Though when it rains during the dry season it will not be heavy rains and will definitely have to shine. Therefore the pathways will still be accessible. And in between the months of March to May and October to November are taken to be the wet season in the park implying rainfall is being received this will be inconveniencing the trekking since the pathways will be slippery making it difficult to be accessed. Since it rains anytime the weather won’t be good this will therefore be affecting the photography. It will be very cold in the park. But  the wet season in the park comes with advantages of the discounts on the permits, accommodation facilities, less crowds in the park. The dry season is also taken to b the peak season and wet season is the low season. After knowing the two different season I’ll say that the best and perfect time for one to go for gorilla trekking in Bwindi is during the dry season which takes up months of December, January, February, June, July, August and early September because the roads, trekking trails and the forest itself will be dry and easily accessed. The forest will be clear since the vegetation and shrubs wont be over grown thus clearly seeing the gorillas and getting clear photos. But this doesn’t not mean that travelling to Bwindi for gorilla trekking is subjected to only the dry season one can visit any time all year around.

Places to stay in while on gorilla trekking in Bwindi impenetrable National park.

Since Bwindi is a very big park and it attracts many tourists for gorilla trekking It was divided into four sectors. Therefore this means that while one chooses a place to stay he or she must consider the sector of Bwindi his going to visit. And it is always advisable to book an accommodation near the area your going to trek  for proximity. Bwindi has a lot of accommodation facilities that offer tourists with places of stay and these are in forms of lodges, cottages, Bandas, Campsites. All of these offer good services to the tourists. One should note that the accommodation facilities in Bwindi cover all classes of peoples no to worry you with choose one depending on your budget. And these include those targeting Buhoma sector should take a look in this list Mahogany Springs camp, Bwindi volcano lodge, Silverback lodge, Engagi lodge, Buhoma community Rest Camp, Sanctuary gorilla camp, Buhoma lodge, Gorilla forest Camp, Haven lodge, Lake Kitandira gorilla forest camp, CTPH Gorilla Conservation Camp among others. Those heading to Ruhija check this list Ruhija gorilla safari, Trekkers Tavern cottages, Gift of nature lodge, Broadbill forest camp, Bakiga lodge, Ruhija safari Hotel, Ruhija community Rest camp, Ruhija gorillas friends Resort and campsite many more. Those going to Rushaga sector Lake Muhele gorilla lodge, Bwindi guest house, Gorilla hills eco lodge, Rushaga gorilla camp, Rushaga gorilla Resort, Wagtail safari lodge, Rushaga gorilla safari lodge, Ichumbi lodge, Bwindi Cultural center among others and those who are to visit Nkuringo sector include; Clouds mountain gorilla lodge, Gorilla Heights lodge, Mutanda Lake Resort, Chameleon hill lodge, Nkuringo Bwindi gorilla lodge. All the facilities in Bwindi range from up market, midrange and budget range.

Gorilla trekking is the primary activity that can be carried out in Bwindi but there are also other activities one can get involved in and these include; Gorilla habituation experience which takes place in the southern part of Bwindi only. And there are only two gorilla groups which are still under habituation therefore they are the only ones to be visited for habituation experience. This activity is fun coz it involves a four hours stay with the habituating gorillas. The Kutu family in Rushaga and the Posho family in Nkuringo are the ones available this means that only eight permits are available per day and they are grouped into two each group having four people. Nature walks which involves hiking through the forest thus exploring and discovering the different angles of the forest, butterfly species, vegetation, plant and tree species, Batwa trail experience, bird species, animals in the park. The nature walks could also take you through the village or communities of the locals thus getting a chance to interact, discover and learn new things like the culture, tradition dances and songs, skills like the hand craft making like basket weaving, mats, bags, hats, Batwa cultural encounter among others. Bird watching since the park is a home to over 360 bird species including the 23 of the 24 Albertine Rift Endemics. Different birds can be viewed during the forest nature walks, taking the birding trails, Waterfall trails among others and these birds can be seen around areas of Mubwindi, bamboo areas, waterbodies and swamps. And the following birds can be observed Striking handsome Francolin, Black bee eater, Grauers warbler, African green broadbill, Ruwenzori Turaco, African Goshawk, African pygmy kingfisher, African sooty flycatcher, African Paradise flycatcher, white tailed crested flycatcher, Brown chested Alethe, Slender billed Greenbul, Strange weaver, Great blue turaco, Red faced woodland warbler, Grey Cuckoo shrike, Ruwenzori Batis among others. Game and wildlife viewing. Since the park has 120 mammals inclusive of the primates  like the chimpanzees, Galagos, De Brazza, Red tailed monkeys, white and black colobus monkeys, Vervet, blue monkeys among other will be seen during the game drives. And animals like elephants, duikers, bush bucks, Civets, jackals, golden cats among others. Other activities include boat canoeing on lake Mutanda, Mountain biking or riding, Camping.