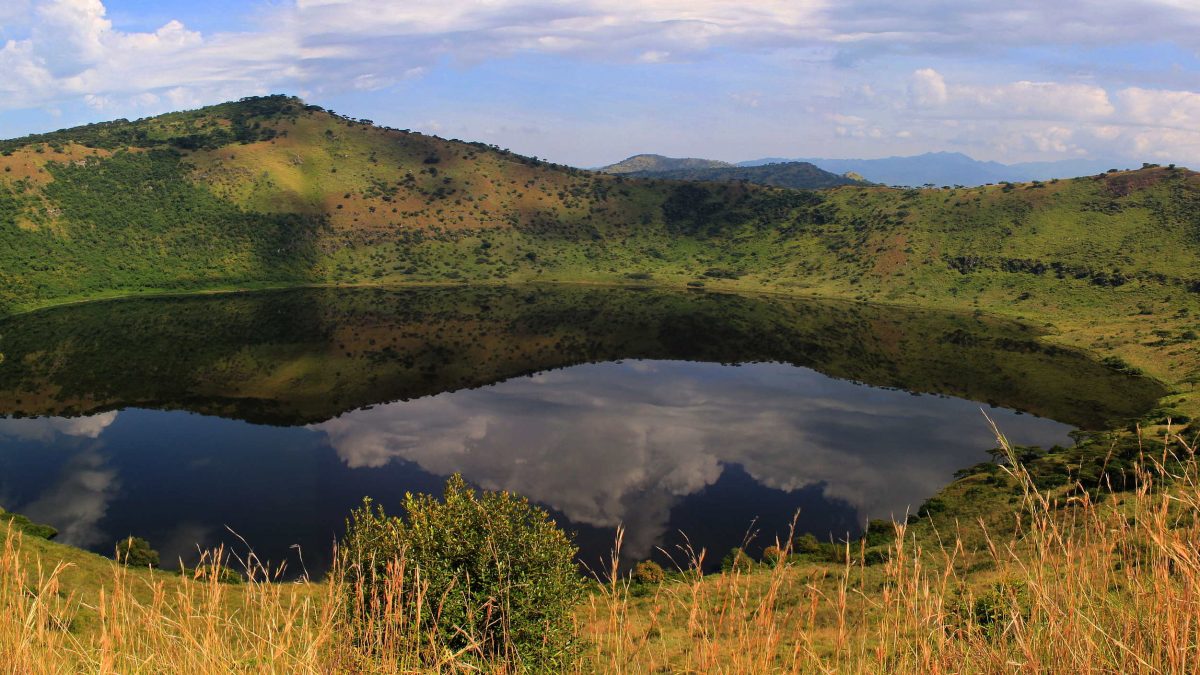 When you clearly see the map of the queen Elizabeth National Park, you will be able to see and the scattered lakes that are found along the well-established trails called the crater trail.  The crater training in the western Uganda also features the other forest of Kibale forest National Park and at the foothills of the Ruwenzori Mountain you will see a lot of the craters as you follow the crater trail which is good for your experience enhancement.

There are several activities  which can be done through  alongside the crater lakes  of the Katwe and the various  tourists  that can  done through the  crater trail include the hiking safaris, biking safaris,  the guided natures walks, boating ride safaris and the then fishing  among the several animals.

Several crater lakes are still releasing foul-smelling sulphurous fumes, indicating that an ejection could occur. Katwe Crater Lake, where salt is exposed; Bunyaruguru Crater Fields on the Kichwamba hill; and Ndali-Kasenda Crater Fields in Kibale National Park are the three biggest pit lakes in Queen Elizabeth National Park. This is a great way to improve the visiting experience.

In queen Elizabeth National Park, the crater lakes are formed as the result of the volcanicity activity and these have formed for all over 8000 year ago. The volcanic activities led to the formation of the crater lakes and the volcanic features area domed as the result of the molten lava that moves from deep inside the earth because of the pressure and then blows the surface of the extinct volcanoes. Rather than forming a volcanic cone, the magma with remnants blasts further away from the vent, forming a massive bowl surrounded by a harsh, rock rubbish and magma domain.

Enjoy the Bunyarugu safari crater lakes, which are located south of Lake George and include both salt and fresh water levels. These lakes are located on the western edge of the Queen Elizabeth National Park in Uganda’s western region. More than 20 sites can be found in Bunyaruguru, with the majority of crater lakes located in the Kichwaba escarpments, which share a border with Queen Elizabeth National Park. The crater lakes are covered in lush vegetation, and it is in Bunyaruguru that you will find Lake Nkugute, which is beautiful and has the entire crater filled with water. If you are on the Mbarara-Kasese high road, you can see the lake from that side.

There is also the Ndali-Kasenda Crater circuit, which you will encounter while opting to explore the crater lake of Queen Elizabeth National Par. Your study and experience of the ancients formed in the Ndali-Kasenda crater lakes by strolling because there are multiple pits throughout a ten-kilometer area ranging from Kibale to the stronghold gateway is very interesting and thrilling.

Along this, the Crater Lake trail of Ndali-Kasenda, you can go mountain hiking or trekking in Bwindi Impenetrable Forest National Park. There is the well-known top of the World Crater Trail, which is a 3 hour guided walk through the pit region with views of the well-known piles of the moon/mountain Rwenzori, the tea manors, Kibale tropical bush, and a variety of other sights.

The interesting views will come when you reach the salt lake Katwe which has been in queen Elizabeth National Park for quite long period of time. This lake is known for the salat mining process  and you will be surprised by the miners who   mine salt from the lake of which most of them are females. Protecting their private parts very well as the safe guard for the negative impacts of Salt of their genitals.

The volcanic activity in Queen Elizabeth National Park has been in place for quite a long time, and now the visitors visiting the park will enjoy all of the safari activities, including the crater lakes. Please try to participate in other safari activities that include chimpanzee tracking, game drive safaris, and other interesting excursions without forgetting the boat cruise trips on Kazinga channel.