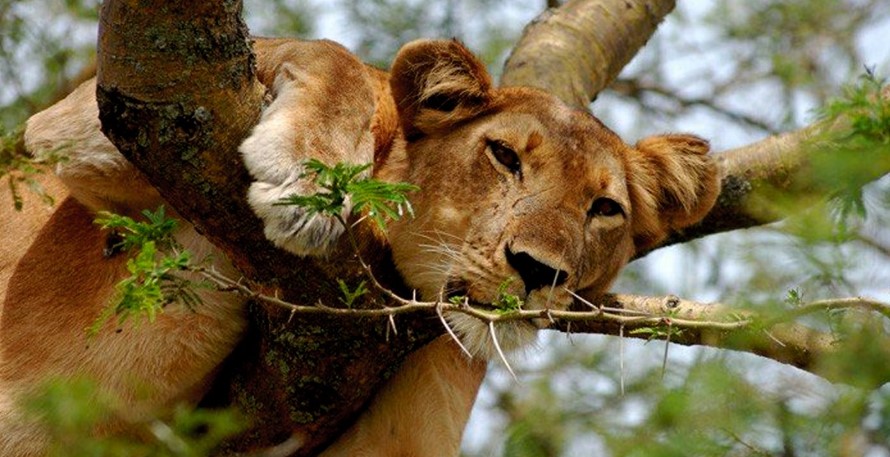 The Pearl of Africa consists of a vast range of wildlife species including both flora and fauna. Some of the unique species of wildlife in uganda inclu de the mountain climbing gorrillas , three horned chameleon , tree climbing lions  and different bird species forexample the shoe bill, sooty booboo etc. A wide range of different types flora \ vegatation and different geographical features such as mountains , rivers and lakes , waterfalls and caves  make up the different game parks in Uganda. The following include the ten different gameparks in Uganda and the different activities that take place in each park.

The park contains one of the loveliest and most varied tracts of tropical forests in Uganda. Forest cover interspersed with patches of grassland and swamp, dominates the northern and central parts of the park on an elevated plateau. The park is ahome to atotal of 70 mammals , most famously 13 species of primate including the  chimpanzee. It also contains 375 species of birds. Kibale adjoins Queen Elizabeth National park to the south to create a 180km long corridorfor wildlife between Isasha, the remote southern sector of Queen Elizabeth National park, and Sebitoli in the north of Kabale National park. Kibale national park is one of Uganda’s most rewarding destinations to explore.

The safe haven is the smallest  park of Uganda’s savannah national parks  and is located in Kiruhura district in western Uganda, coordinates : 00 36S, 30 57E. It is also 240 km by road  west of Kampala , Uganda’s capital and largest city. LMNP is a home to 350 bird species as well as zebra, impala, eland, oribi, defassa, waterbuck, leopard, hippo, hyena, topi and reedbuck. Once continuos with the northern plains of Tanzania, LMNP hosts diversity found nowhere else in Uganda. The Ruizi river feeds 14 lakes and swamps that support abundant herds of antelope. Enchanting acaccia woodland is increasingly a major part of the park. Along side the wildlife , the park is home to Ankole long horned cattle cared for traditionally by the Bahima pastoralists.

The unique national park lies in southwestern Uganda on the edge of the rift valley.It’s mist covered hillsidesare blanketed by one of Uganda’s oldest  and most biologically diverse rainforests, which dates back over 25000 years and contains almost 400 species of plants . More famously , this “impenetrable forest” also protects 320 mountain gorillas , roughly half the world’s population including several habituated groups, which can be tracked. Thi biologically diverse region also provides to further 120 mammals, including several primate species such as baboons and chimpanzees as well as elephants and antelopes. there are around 250 bird species hosted in the forest including  23 albertine rift endemics.

Kidepo valley national park lies in the rugged, semi arid valleys between Uganda’s borders  with South Sudan and Kenya, some 700km from kampala. Gazetted as a national park in 1962. It has a profusion of big game and hosts over 77 mammal species as wellas around 475 bird species. Kidepo is Uganda’s most isolated game park, but the few who make the long  journey north through the wild frontier region of karamoja would agree its also magnificent, for Kidepo ranks among Africa’s finest wildernesses. From Apoka , in the heart of the park , a savannah landscape extends far beyond the gazetted area, towards horizons outlined by distant mountain ranges. During the dry season, the only permanent water in the park is found in wetlands and remnant pools in the broad Narus valley near Apoka.

Queen Elizabeth national park is understandably Uganda’s most popular tourist destination. The park’s diverse eco systems, which include sprawling savannah , shady, humid forests, sparkling lakes and fertile wetlands, make it the ideal habitat for classic big game, tenprimate soecies including chimpanzees and over 600 bird species. Set against the backdrop of the jagged Rwenzori mountains, the park’s magnificent  atractions include dozens of enormous craters carved dramatically into rolling hills , panoromicviews of the Kazinga channel with its banks linned with hippos, buffalo and elephants and the endless Isasha plains, whose fig trees hide lions ready to pounce on herds of unsuspecting Uganda kob. Also, the park has a fascinating cultural history . There are many opportunities for visitors to meet the local communities and enjoy storytelling, dance, music and more. The gazette of the park has ensured conservation of its eco sytem , which in turn benefits the sorrounding communities.

Semuliki national park sprawls across the floor of Semuliki valley on the remote, western side of the Rwenzori. The park is dominated by the eastern most extension of the great Ituri forest of the Congo basin. This is one of Africa’s  most ancient and bio diverse forests ; one of the few to survive the ice age 12 to 18000years ago.  The valley contains numeruos features forexample  Sempaya hot springs . its numerous bird species make it  typical birds safe haven.

The magnificent game park  lies at the northern end of the Albertine rift valley, where the sweeping Bunyoro escarpment tumblesinto vast , palm dotted savanna. First gazette as agame reserve in 1926, its Uganda’s largest and oldest conservation area, hosting 76 species of mammals 451 species of birds. The park is bisected by the Victoria Nile, which plunges 45 meters over the remnant rift valley wall, creating the dramatic Murchision falls, the center piece of the park and the final event in an 80km stretch of rapids. The mighty cascade drains the last of the river’s energy, transforming it into a broad , placid stream that flows quietly across the rift valley floar into Lake Albert. This stretch of the river provides one of Uganda’s most remarkable wildlife spectacles. Regular visitors to the banks include elephants, giraffes and buffaloes; while hippos, Nile crocodiles and aquatic birds are permanent residents.

At 4,000 km^ Mt Elegon has the largest volcanic base in the world . Located on the Uganda and Kenya border, its also the oldest and largest solitary, volcanic mountain in East Africa . Its vast form , 80 km in diameter, rises more than 3,000m above the sorrounding plains . The mountain’s cool heights offer respite from the hot plains below, with the higher alttitudes providing a  refuge for flora and fauna. The park is also a home to over 300 bird species including the endagered Lammergeyer, small antelopes, forest monkeys, elephants and buffaloes also live on the mountain side. The higher slopes are protected by national parks in Uganda and Kenya , creating an extensive trans boundary conservation area that has been declared a UNESCO man and biosphere reserve. A climb on Mt Elegon’s deserted moorland unveils a magnificent and uncluttered wilderness without the summit oriented approach common to many mountains: the ultimate goal on reaching the top of  Mt Elegon is not the final ascent to the 4321m Wagagai peak, but the descent into the vast 40km caldera. Not forgetting the Sippi falls south of the park in kapchorwa.

The Rwenzori’s  , the fabled mountains of the moon , lie in western Uganda  along the Uganda Congo border. The equatorial snow peaks include the third highest point in Africa, while the lower slopes are blanketed with moorland,  bamboo and rich , moist montane forest. Huge tree heathers and colourful mosses are draped across the mountain side with giant lobellas and ‘everlasting flowers’ creating an enchanting , fairytale scene. The park protects the highest parts of the 120km long and 65 km wide Ruwenzori mountain range.  the park hosts 70 mammals and 217 bird species including the Albertine Rift endemics as well as the rarest vegatation in the world. The Ruwenzori’s are a world class hiking and mountaineering destination. A nine to twelve day trek will get skilled climbers to the summit of Margherita, the highest peak , though shorter non technical treks are possible to scale the sorrounding peaks.

Mgahinga gorilla national park sits high in the clouds , at an alttitude of between 2,227m and 4,127m. As its name suggests , it was created to protect the rare mountain Gorillas that inhabit the dense forests , and its also an important habitat for the endagered Golden monkey. Furthermore the park has a huge cultural significance , in particular for the indigenous Batwa  pygmies . This tribe  of hunter , gatherers was the forests ‘first people’  and there ancient knowledge of its secrets  remains unrivalled. Mgahinga’s  most  striking features  are its three conical , extinct volcanoes , part of the spectacular Virunga range that lies along the border region of Uganda, Congo and Rwanda. Mgahinga forms part of the larger Virunga conservation area that includes adjacent park in these countries . The Volcanoes’ slopes contain various ecosystems  and are biologically diverse, and there peaks provide  a striking backdrop to this gorgeous scenery.

On the whole , all the different game parks have well built Eco friendly accomodation infrastructure , favouring all  classes of travellers from high end luxurous to budget tourist.