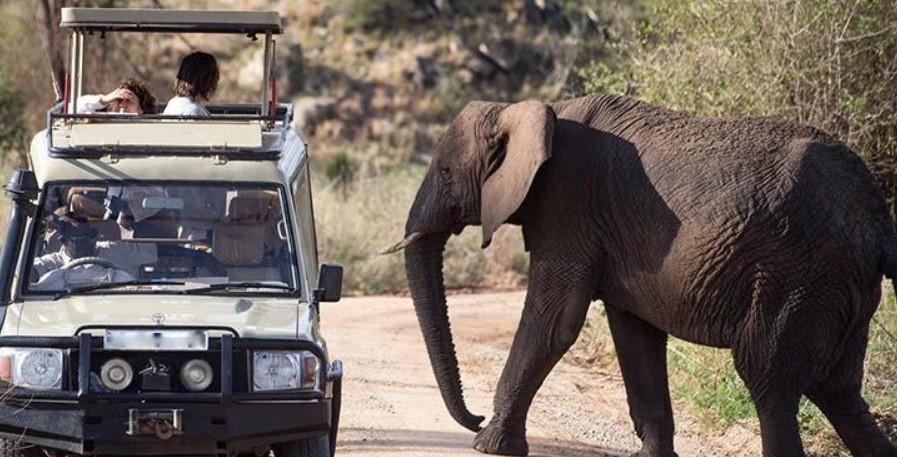 Game viewing is an exciting and one of the most carried out activities in Queen Elizabeth National Park, the most visited game park in Uganda The Pearl of Africa. The park is located in western Uganda in the rift valley popularly known as the Albert Rift valley.  This activity of game viewing involves visitors driving through the game park while studying, viewing, and observing the numerous wildlife species and vegetation types that co-exist and are important for the survival of one another.

Queen Elizabeth National Park is well known for being a home to numerous different wildlife species and bird species some of which include large herds of elephants about 3000, over 4000 Hippos most especially around Kazinga Channel, numerous herds of Buffaloes estimated to be over 1000 buffaloes in the game park, other wildlife species one should be sure to see while on the Game drive include; Warthogs, primate species in Kyambura gorge such as the Chimpanzees, baboons, and monkeys, Leopards, Lions, Civet cats, and antelopes among others.

Game viewing can occur both during the day and night times. Both time settings offer different experiences but both are rewarding experiences. The daytime game drives offer very many different spectacular views of the different wildlife species that are very active during the day such as antelopes, warthogs, and primates such as baboons and chimpanzees. On the other hand, night game drives are special as they expose to the visitors the nocturnal wildlife species that are almost impossible to be viewed during the day. Some of these include Leopards, lions, and some bird species like owls among others.

While in this breathtaking game park, the sights of certain animals are as simple as staring into the vast savannah grasslands and you will see an elephant. Other animals are so difficult to be seen given their particular lifestyle and therefore these animals need to first be tracked down. Some of the activities carried out during a game viewing include the following.

This is among the most exciting game viewing activities as it is carried out in the famous “Valley of Apes” also known as Kyambura gorge. It is gifted with tropical rainforests and riverine forests which act as perfect habitats for the different primate species in the gorge such as chimpanzees, Olive baboons, and red-tailed monkeys among others. Visitors spend time watching, learning about the lifestyles, and ways of the chimps. The park has one habituated group of chimpanzees that is used to the sight and presence of humans. The activity is best done in the morning given the early to rise lifestyle of the chimps in search of food.

This process of tracking Lions is more of scientific research than an activity designed for tourists. This is mainly because expertise is needed for the success of a lion tracking experience and a professional researcher is supposed to be included. In Queen Elizabeth National Park, lion tracking is carried out by the Uganda Carnivore Project. They track down lions that have radio collars and this lion tracking experience takes place in Kasenyi savannah plains, Ishasha sector for tree-climbing lions. The activity costs USD 60 dollars for foreigners and 100000 for East Africans and requires anyone interested to book in advance.

This unique activity is carried out on foot on the Mweya peninsular overlooking the Kazinga Channel. With the help of a professional tour guide, you will be able to see the unique rodent species and learn more about the mongoose lifestyle and behavior. Be keen to view different species of birds and warthogs during the Mongoose tracking experience in Queen Elizabeth National Park.

The boat cruise is one of the very many activities one cannot afford to miss during a trip to Queen Elizabeth National Park. This breathtaking activity offers spectacular views of different landscapes and vegetation in the park. The boat cruise is carried out along the famous Kazinga channel which is the 40 km long channel that joins Lake Edward and Lake George. The cruise lasts roughly 2 hours and visitors should expect to view different wildlife species such as the famous Nile crocodile, Hippos, Buffaloes, and different bird species such as the Great White and Pink-backed Pelican, Open billed stork, Saddle-billed stork, Long-tailed cormorants, Darters, Black crake among others. The activity costs 30 $ per person and it takes place twice a day in the morning and evening.

This is also another exciting and rewarding game viewing activity that involves looking out for birds in the park. The park is known to be home to over 619 bird species some of the commonly spotted ones include the African Fish Eagle, Martial Eagle, Flamingos though these are seasonal, Shoebill stork, African mourning Dove, Diederik Cuckoo, Square-tailed Nightjar, Yellow-billed stork, Papyrus Gonolek, Malachite Kingfisher, Pied Kingfisher among others. For a rewarding and satisfying birding experience, a professional tour guide is advised. Journeys Uganda is one tour company in Uganda that offers some of the best Birding Safaris with extremely professional birding tour guides.

What is the best time to carry out game viewing in Queen Elizabeth National Park?

Game viewing involves opportunities to clearly view animals and this makes the dry season the best time for game viewing in Queen Elizabeth National Park. This is usually from December to February and June to July. Dry seasons encourage better viewing since animals usually converge at particular water holes and there is clear visibility in the park, Unlike the wet seasons.

The park is located 410 km from Kampala the capital city and it takes roughly 7-8 hours to reach the park by road. The commonly used route is the Kampala-Fort portal route. The park can also be accessed by air. This is done by boarding a flight from either Entebbe airport or Kajjansi Airstrip to Kihihi airstrip and this takes roughly one-two hour.

Where to stay while at the park?

Game drives are carried in the game park and this should be done conveniently without anyone worrying about accommodation. Some of the recommendable accommodation spots inside and around the park include Mweya Safari Lodge, Jacana Safari Lodge, Red chili Hideaway, and Ishasha Jungle Lodge among others.