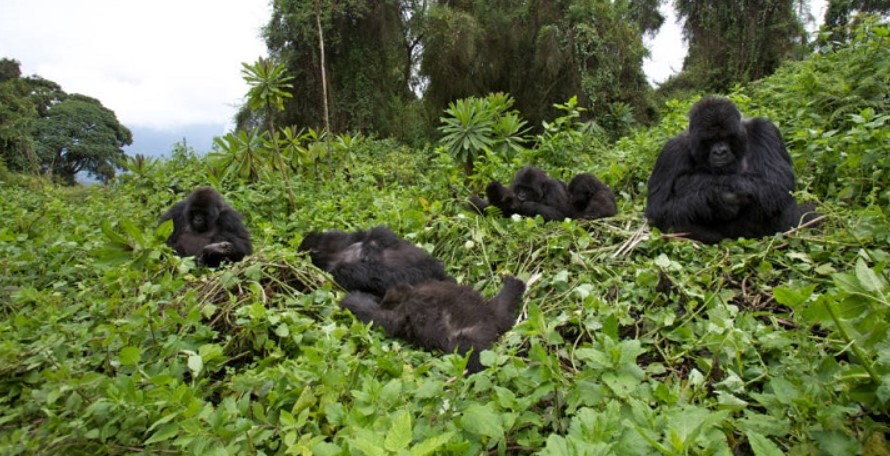 Gorilla families in Virunga National Park in Congo are harbored in the Virunga national park which is found in the Eastern part of Democratic Republic of Congo and one of the gorilla parks in the Virunga massif which is situated on an area of 8090 square kilometers extending about 300 kilometers from north to south along the border of Rwanda and Uganda.

Kabirizi gorilla family is currently under leadership of Kabirizi a humble and powerful silverback who is currently facing some competition  from another silverback called Masibo. This group is comprised of 19 members and is found in the Bukima sector of Virunga national park. Kabirizi group is also known as the Ndungutse which was derived from the dominant silverback who was killed in the cross fire between the government and the rebels. Silverback Ndungutse was a giant humble silverback who led the group for a good time until he was assassinated in 1997 after his death Kabirizi silverback took over. The family was renamed Kabirizi in the memory of rye Director of the Congolese institute of Conservation of Nature who died in a road accident.

Humba family is found in Bukima Sector of the park and was named after the dominant silverback Humba. Humba is the son of the late Rugendo who separated from the Rugendo gorilla family in 1998 who led other members into leaving the Rugendo family the led to the formation of this group and a brother to Senkwenkwe who was killed by gunmen in 2007. This Humba family is among the calmest gorilla family in Virunga national park and is being liked by many tourists. Humba family had 16 members in 2014 but due to the break up the group remained with only 6 members and its just increasing due to the births.

Rugendo has nine individuals with 3 silverbacks, 1 black back, 1 adult female, 2 sub adults and 2 infants with having Bukima as the current dominant silverback. This group was habituated in 1989 and is one of the oldest gorilla groups. Rugendo family got Its name from the then dominant silverback Rugendo who was killed. This family is found in the Mikeno sector which is between Bukima and Bikenge. Rugendo silverback is a father to Mapuwa, Humba, Senkwenkwe. Rugendo gorilla family is seen as the mother group to most of the families in Virunga national park which originally had 18 members under leadership of Rugendo silverback and during his power, he was faced with many challenges including one from his own son Rugendo Humba in 1998 who walked away with 9 members from Rugendo family and the group remained with 8 members

This gorilla family is a found in  the Jomba near the Congo Uganda border of Bunagana and currently has 22 members. Mapuwa who was the leader of this group and a son to the Rugendo a dominant silverback of Rugendo group who broke away with 2 adult females Jichi and Mafaze and went on gathering more from other groups and with more birth in the family the group grew. Currently the group is under leadership of Mveyekure. Initially the group was under leadership of Mapuwa.

This group was being known as Mwekura and was later renamed Lulengo in the memory of the Technical Director of Virunga National park who was killed by a landmine. This family has 9 members with a dominant silverback inclusive. Lulengo group can be found in Jomba area near the Bunagana border of Congo and Uganda. Lulengo silverback was a member of Rugabo gorilla group the first habituated group in Virunga National park led by Rugabo silverback  the father to silverback Rugabo. Unfortunately silverback Rugabo was shot by poachers in the great lake refugee crisis.

Bageni group is currently under leadership of Bageni and has the highest number of  gorillas with a total of 26. Silverback Bageni is facing competition from other two silverback Kitegenda and Karamaharagi who also want the top position. Due to this any time the group is likely to split. This group got a name from Its dominant silverback.

This group is being led by the dominant silverback Gasore. This family has gone through seasons o leadership that is first was under leadership of silverback Munyaga who was succeeded by silverback Mawuzo who is now currently succeeded by Gasore. This group has gotten twins who unfortunately died during the infant size and popular for the twin mother Bilal a former member of the Rugendo group. Munyaga family is located in Bukima sector of Virunga national park and was habituated in 2010 and named after silverback Munyaga Its former leader.

This is the newly habituated gorilla family in Virunga national park having 12 family members and the group is under leadership of silverback Nyakamwe. This is one peaceful family so far with no power struggles signs.

After seeing the available gorilla groups for trekking in Virunga national park lets now look at other attractions that can be seen in the park. Mountain gorillas are not the only fun and existing attraction the park has other primate species that one can look out for in the Virunga national park and these include the golden monkeys, blue monkeys, Red tailed monkeys,  black and white colobus monkeys, chimpanzees. The park has been gifted with two active volcanoes that are among the chain of the Virunga mountains and these are Mountain Nyamuragira and mountain Nyiragongo and on top of these mountains there is  caldera lakes,  there are crater lakes, animals of the park like forest elephants, buffaloes, giant forest hog, Antelopes, Pelicans, Warthogs, Giraffes, Hippos among others, the beautiful birds like Grey throated barbet, Narrow tailed Starling among others. We can not miss mentioning the vegetation of Virunga national park which ranges from open savannah grassland, rainforests, Afromontane forests, bamboo, shrubs among others. Therefore Virunga national park is indeed rich in the biodiverse.