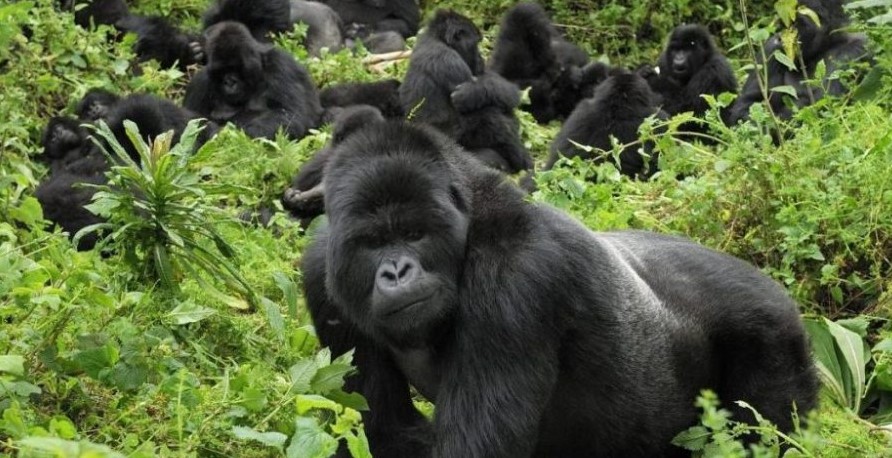 This group was studied by Dian Fossey and this group contains 28 members including 3 silverbacks. Susa group was named after the Susa river and initially this group had 42 members but it broke into two due to the power conflicts. Susa A group tend to live up in the mountains and hence its among the difficult families to trek though it’s a rewarding one coz Susa A had the famous playful young twins called Impano and Byishimo.

Karisimbi or Susa B gorilla family.

This group has 15 members and is usually found on the slopes of Karisimbi Mountain on of the eight mountains in the Virunga massif. Susa B group split from the Susa A after a long disagreement and hence the group divided into two Susa A and Susa B. Tracking this gorilla is abit challenging and they tend to move from one place to another if they wander too far on a particular day tracking activities may be cancelled.

This group is a small group of about eight members being led by a powerful silverback called Guhonda at 220kg. Guhonda is perhaps the largest silverback in the park. This group derives Its name from the Sabinyo Volcano and the word Sabinyo mean “old man’s teeth”. Silver back Guhonda has kept his family together by excluding his rival silverback Ryango to a loner outside  the group. This group contains playful juveniles and are easy to spot because they stay near the park’s edge.

This gorilla family is being led by Ubumwe and has 17 members. Ubumwe means peaceful and he remains calm and peaceful even after losing a few group members to Charles another silverback from Umbano. Amahoro gorilla family lives on the slopes of mountain Bisoke this reaching the group involves climbing the steep slopes.

Umbano means living together and this group was once part of the Amahoro gorilla group until Charles the silverback broke away from Amahoro family with some females. Umbano gorilla group contains 11 individuals with 6 youngsters and lives in the area near the Amahoro. Trekking through gorilla group is easy since it requires less effort.

This group is known as Group 13 and is led by Nyakarima before Agashya challenged him to the deadly fight after which he made off with the entire family up the Volcano. This complete take over was the first to b observed by the gorilla researchers. Agashya continued increasing his family number by stealing members from other groups. Agashya group lives near Sabinyo gorilla group and this group has grown to about 25 members.

Kwitonda gorilla family has 18 individuals that includes 2 silverbacks led by silverback Kwitonda. Kwitonda means a humble one in Kinyarwanda. This group originated from gorilla groups in Congo and they live around the slopes of mountain Muhabura but ten to move in a wide geographical area which makes tracking them tiresome.

This is a relatively new group that was created when some individuals from group 13 an Sabinyo family came together to form their own group. Hirwa group is found on the slopes of mountain Sabinyo and is being led by a dominant and protective  silverback Hirwa and the WOR Hirwa means lucky one and I can about because of the voluntarily joining of other members and this was in 2006 and this group now is comprised of 13 members twins inclusive.

Bwenge means wisdom and this group was formed in 2007 by Bwenge and is the dominant silverback. Bwenge left his group of birth and was joined by the female members from other groups. This family has 11 individuals and they live up in the steeps and sometimes on the hill in the slopes of Karisoke volcano.

This group lives around the Karisimbi area and contains 11 members including the 2 silverback. Ugenda means in Kinyarwanda being on the move and used in reference to the moving nature of the group because of their wandering habit and tracking them can be very difficult on some days.

Its important to note that if you don’t have a gorilla trekking permit you will not be allowed to visit these mountain gorilla families. You have to book gorilla trekking permit which is acquired from the Rwanda Development Board and this permit costs 1500dollars. This amount costs a gorilla habituation experience permit. Trekking gorillas in Rwanda is more expensive compared to Uganda and Democratic Republic of Congo.

Always choose to go and see the mountain gorilla families during the following months December, January, February,  June, July, August and September for the best trekking experience. Since there is no rainfall in the park or its very little when it rains therefore the roads are dry passable and accessible.