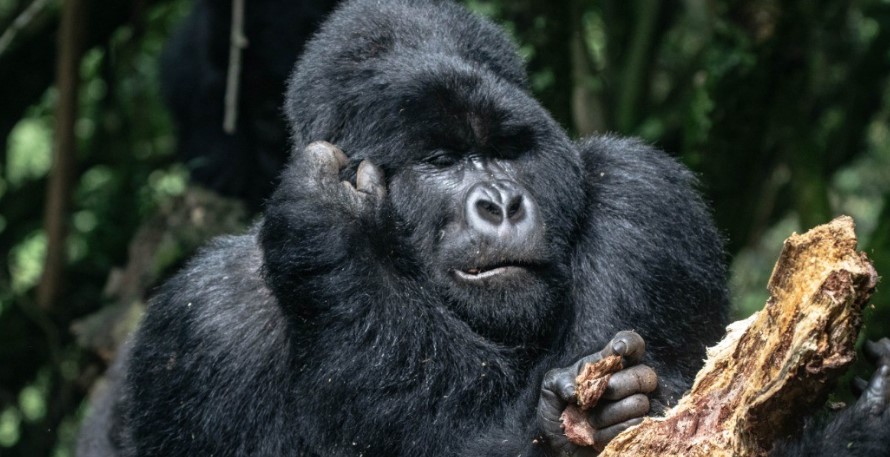 Mgahinga gorilla national park is a located in the south western part of Uganda found in Kisoro district. This park is the smallest park among the national parks in Uganda and among the three national parks in the Virunga massif covering an area of 33.7square kilometers. Mgahinga national park was gazeted in 1991 to protect the mountain gorillas and conserve nature therefore the park is a home to 76 mammals including the mountain gorillas which are the major attraction of the park, golden monkeys, L’Hoests monkeys, black and white monkeys, golden cats, buffaloes, forest elephants, bush bucks, black fronted duikers, giant forest hog among others, over 115 bird species like handsome francolin, Kivu ground thrush, black kite among others, Lake Mutanda and the three Virunga volcanoes that is Mount Muhavura, Mount Sabinyo and Mount Gahinga.

The scenery in and around the park is stunning with the three extinct volcanoes all having their slopes in the park, the forests which provide shelter and sufficient food for the mountain gorillas and other park animals.

Gorilla trekking in Mgahinga takes you through hiking the forests to search for the endangered mountain gorillas in their natural habitants. Gorilla trekking is the primary activity that is carried out in the park since the park has over 100 mountain gorillas in the habitants. Gorilla safaris in Mgahinga national park are great and fun because there are less crowds compared to Bwindi Impenetrable national park.

Gorilla trekking in Mgahinga starts very early in the morning just like it is in Bwindi impenetrable national park with the briefing about the dos and don’ts during trekking at the park headquarters then tracking starts at Ntebeko. This activity takes about 30mins to more depending on where the gorillas are located since they move from one place to another in search for the food. During gorilla trekking different attractions in the park will be seen like the birds in the area, animals in the park, mountains, lakes, vegetation, plants and tree species. Just like gorilla trekking in Bwindi Impenetrable national park, gorilla trekking requires one to purchase a gorilla trekking permit which is acquired from the Uganda Wildlife Authority offices and booking has to be done in advance and the permits costs 600dollars to the foreign residents, 700dollars to the foreign residents and 250000shs to the East African citizens. It should be noted that tourists allowed to involve in gorilla trekking should be 15 years and above and trekkers are accompanied by guides and park rangers once a particular gorilla family is tracked a period of one hour is given to the tourists to spend with the gorillas to learn about the behaviors, habits and lifestyle, taking photographs and recording moments.

Nyakagezi gorilla family has 10 members and it got Its name where  first seen. This group was first led by the silverback Bugingo who was later succeeded by Mark as the leader and assisted by his brother Mafia. Members in this group include 5 silverbacks, 2 adult females, 3 infants and was habituated in 1991 after Mgahinga was gazeted as a national park and opened for trekking in 1994 after going through a habituation process. Nyakagezi group is known for migrating into the neighboring destinations and these live in the lowlands.

Hirwa gorilla group migrated from the volcanoes national park in Rwanda to Mgahinga National park in 2019. This group split from the Susa group in Rwanda due to the misunderstandings between silverback Munyinga and the dominant leader of Susa gorilla family for mating with their females then Munyinga decided to leave with two adult females thus creating the Hirwa gorilla group. This group has 13 members after losing 4 of the members who were struck down by lightening  and It is being led by Silverback Munyinga.

You can choose to visit the park any time. But since gorilla trekking requires hiking through the forest , on the steep slopes its always good and easy to trek she the conditions are favorable. And this happens during the dry season when the park doesn’t receive or  receives very little rainfall incase it rains and the park roads and pathways are easily accessed thus making hiking through easy, the vegetation is not over grown favoring clear observing of the attractions and also making accessibility in the forest easy.

While during the wet season which is in the months of March to May and October to November when the park is receiving rainfall thus making it wet, roads and pathways impassable thus making hiking a challenge. The only advantage of the wet season is about the discounts offered on the permits, accommodations. Therefore it I always perfect and best to always visit Mgahinga for gorilla trekking during the dry season which is in the months of December to February and June to September.

Places of stay while on gorilla trekking in Mgahinga gorilla national park.

There are quite many places of stay one can choose from while on a visit in Mgahinga but it is always good to choose those that are close to the park headquarters since trekking starts very early in the morning. And these include Mountain Mgahinga Rest camp, Muhabura motel, Mount Gahinga lodge, Mgahinga community camp, Mocha camp, Kisoro tourist hotel, Amajambere Iwacu community camp, Bwindi jungle lodge, Travellers nest hotel, Chameleon hill lodge, Nkuringo mountain gorilla lodge, Clouds mountain gorilla lodge, Virunga hotel, Lake Mutanda resort, Lake Mutanda campsite among others.

Other activities one can engage in Mgahinga national park.

Golden monkeys are the unique attraction in the park and golden monkey tracking can be only done in Mgahinga national park. This also starts very early in the morning and it is such an adventurous activity. While on this activity expect to see other primates in the park like the black and white colobus monkeys, L’Hoests monkeys, Blue monkeys among others.

Other activities include the cultural tours done on the Batwa people, Nature walks carried out in the forests and on the mountains, birdwatching since the par has many bird species like mountain masked Apalis, Rwenzori nightjar, Rwenzori turaco, blue headed coucal, Olive pigeon, Kivu ground thrush, black kite, handsome francolin, Stripe breasted Apalis, Dwarf honeyguide among others.