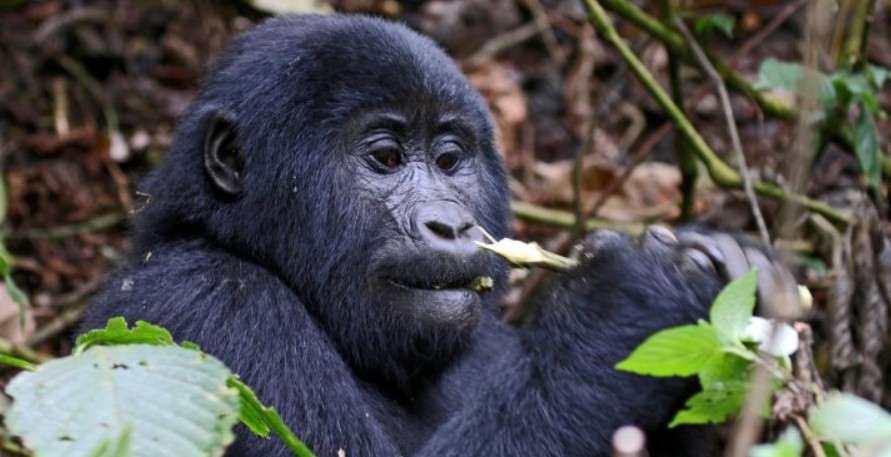 Gorilla Trekking in Virunga National Park: Virunga is a park situated in the Virunga massif on an area of 8090 square kilometers extending about 300 kilometers from the North to south along the border of Rwanda and Uganda which is situated in the Eastern part of Congo which is also crossed by the equator that is why It has high temperatures especially in the dry season. At first this park was know as Albert national park and later renamed as Virunga national park. In 1925 the park was gazeted primarily to protect the gorillas and conserve nature and later in 1979 the park was recognised as the UNESCO world’s Heritage  due to Its diverse habitants  harboring the mammals like the giant forest hog, bush bucks, forest elephants  and so on, birds like Rwenzori turaco, African fish eagle, primates with the commonest being the mountain gorillas followed by the golden monkeys, blue monkeys, De Brazza’s, red tailed monkeys, colobus monkeys among others. The park also hosts the two active volcanoes which are among the 8 chains of the Virunga mountains, Vegetation son of which are of the Albertine Rift endemics. Virunga national park is one of the oldest park in Africa which is managed by the institute of Congolais Pour La Conservation de La nature which is part of the Congolese  National park Authority. Virunga national park is strategically located with the Congo Nile river basin with Its Central part covering two thirds of Lake Edward and extends to Queen Elizabeth National park in Uganda. The Southern sector of the park encompasses the Lake Kivu, mountains Nyiragongo,  Nyamuragira and Mikeno.

Gorilla trekking in Virunga starts at Bukima rangers post where you are given a briefing about the expectations, rules and regulations, meet the tour guides, porters and park rangers. After the briefing you I’ll be allocated to particular gorilla family to trek and this is done following some conditions then you I’ll be grouped into eight people per group to trek a particular family. After all that is don’t you I’ll follow your guide to the forest and then hiking and trekking starts and this can last for minutes to 3hours or even taking half a day depending on the location of the gorillas. After a particular gorilla family has been tracked then you will be give not more than an hour to spend with the gorillas learning about their communication skills, how they relate, play, feed therefore you will end up learning about their behaviors and lifestyles.

Before one thinks of going for trekking the first thin to come into their minds is the gorilla permit. This is a primary requirement when it comes to trekking. A gorilla trekking permit in Congo is the cheapest compared to the permits in Uganda which cost 600dollars to the foreign residents, 700dollars to the foreign non residents and 250000shs for the East African residents and those of Rwanda being the most expensive since they cost 1500dollars. A gorilla trekking permit in Congo costs 400dollars. Gorilla trekking in Volcanoes national park can be done either in groups or private tours and there are two sectors where the gorillas can be found and these are Rumangabo and Bukima sectors.

While in the park you are not allowed to eat, drink and smoke during trekking.

You must wearing a mask and keep a distance amongst one another.

Don’t make noise coz this might alarm or scare off the gorillas and other attractions like birds, animals

Don’t touch the gorillas coz they are wild animals.

Don’t feed the gorillas unless your being told.

Incases when the gorillas charge crouch down, don’t look them into the eyes and wait for it to leave.

A distance of 7 meters must be kept between you and the gorillas and always keep in a tight group.

When you are feeling sick please endeavor to stay behind so as not to spread the disease to the animals.

What you need to know before you go for gorilla trekking in Virunga national park.

You have to be prepared in such a way that your sure of your fitness levels since gorilla trekking involves hiking through the dense forests, steep ridges, valleys, hills, cross the streams all of this requires some energy and fitness. Trekking some families can be tiresome so one has to be prepared for all of that.

Ensure that you have all the required documents needed ranging from the travel documents to the trekking permit.

Ensure that you have all the requirements for gorilla trekking like the clothing’s, gloves, insect repellent, sun creams, enough water or energizers, packed lunch, if you have a big  luggage  ensure that you hire a porter to help you save the burden for an interesting hike and trekking.

Book with a reputable tour operator like the JOURNEYS UGANDA coz we always ensure that our clients get the best services ranging from transportation, accommodation, booking the gorilla permits on time.

Carry things to keep you warm coz u never know when it might rain. And especially in the months of October,  November, March, April, and May when there is heavy rains, wetness and coldness in the park.

Always choose to go visit during the dry season which has favorable conditions like the dry roads, pathways. And this is always in the months of December,  January,  February,  June, July, August and September. When you visit during this you wont have to face trouble hiking through the forest, steep slopes, hills, mountains thus I’ll end up having an adventurous, amazing trip.

Apart from gorilla trekking, there are other activities one can take part in while in Virunga national park like the mountain climbing, golden monkey tracking, game viewing, forest nature walks following the Rumangabo nature trails which is rich in birds, community tour, pygmy experience, visiting the gorilla orphans at the Senkwekwe gorilla orphanage, bird watching

getting to Virunga national park

You can access Virunga national park from the two routes that is Uganda route and Rwanda then to the park.

This route involves arriving through Kigali international airport and here you book a flight with the international airlines like the Qatar air way, Ethiopian airways and then you will be received by your guide from the tour company you dealt with who will either take you to your place of stay or will take you straight to Gisenyi in Rwanda a journey which takes about 4hours. Gisenyi town is close to the border of Congo and you will have to show the necessary documents once you reach the border to Congo and then proceed to the park.

Note: A traveler will be required to acquire another Visa while entering back Rwanda after trekking in Virunga national park

NB for easy accessing which will grant you multiple entries you can get an East African Visa at a fee of 100dollars.

This one is a longer route compared to the other one and its best for one who is already in Kisoro, Kabale or the western part of Uganda. If your coming from Kampala or Entebbe you will have to endure the long distance  since it takes about 8hours to get to Kisoro  and you will enter Congo through the Bunagana border.