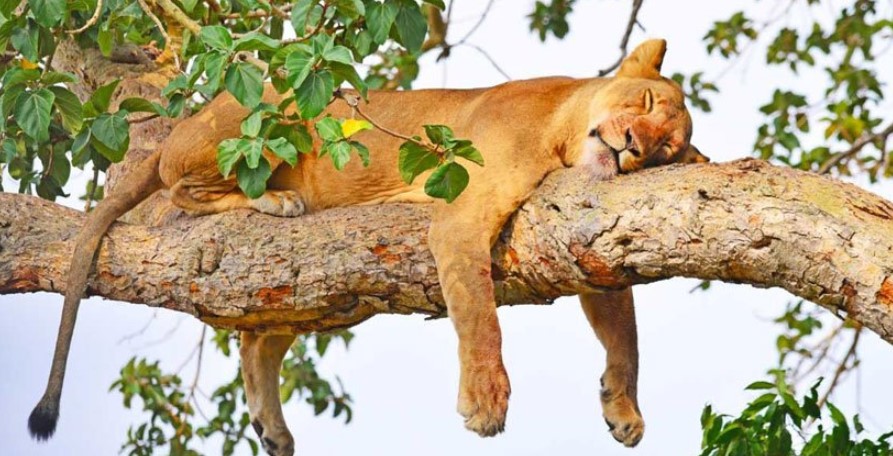 Ishasha sector is dominated by the Candelabra tree with big branches, Savannah woodland tree species like acacia trees, cactus trees, fig trees and Ishasha sector is located fur in the South Western part of Queen Elizabeth National park with the magnificent land scape that is different from that is found in other parts of Queen Elizabeth National park.

Queen Elizabeth National park is situated in the south western part of Uganda stretching in districts of Kasese, Bundibugyo, Kamwenge, Rukungiri with 764 square miles and the park was gazeted in 1952 later on in 1954 was renamed as the Queen Elizabeth after the visit of the British monarchy. Queen Elizabeth is a home to over 600 bird species like Pied kingfisher, Open billed stork, Striped kingfisher, White headed barbet, helmeted guinea fowl, Palm nut vulture, Grey crowned crane, hooded vulture, White tailed lark, Martial eagle, Grey capped warbler, 10 primate species like baboons, white and black colobus monkeys, Red tailed monkeys, Vervet, L’Hoests monkeys, Pottos among others, over 95 mammals like the lions, buffaloes, leopards, elephants, giant forest hog, civet, side stripped jackals, hippos, Warthogs, crocodiles, bush bucks, water bucks among others. Queen Elizabeth has 10 crater lakes like the Katwe lake, Lake Nyamasingiri, Lake Kyasanduka among others. Queen Elizabeth is close to the equator and it has a tropical type of climate therefore It receives rainfall any time of the year. Queen Elizabeth has sectors in which attractions of the park are found and these include Ishasha sector, Kasenyi sector, Mweya peninsular sector and Kyambura gorge sector.

In addition to the unique population of the tree climbing lions within the Ishasha sector there is a huge number of Uganda kobs and the numerous antelopes. Since Ishasha sector is a breeding area for the kobs.

Ishasha sector has a wide range of attractions when it comes to wildlife. These can be seen during the game drives in the sector. Ishasha sector has got River Ishasha which can be explored on foot from your place of stay along the River bank you will come across the hippo population mostly observed clearly from the Ishasha Wilderness camp. Away from the River light acacia woodland and savannah supports the large herds of buffaloes, white elephants which are seasonal, huge herds of elephants will be seen crossing the road known as the African elephants, many herds of cattle.  The forest harbors a good number of the bush bucks an the monkeys like the white and black colobus monkeys, blue monkeys, Red tailed monkeys so much more there are bird species that will be spotted in the Ishasha sector since the park is considered to be among the best birders haven and birds like Cassin’s grey flycatcher, broad billed roller, yellow billed ox pecker, grey wood pecker, Stripped kingfisher, Ross’s turaco, African crake among others.

Where to sleep and spend nights in Ishasha sector.

There are many places to stay in while you’re on a safari to Queen Elizabeth National park and these offer favorable services to the visitors with well trained staff. These accommodation facilities offer good scenic views of the park and these include; Ishasha wilderness camp, Ishasha Ntugwe River lodge, Enjojo lodge, Ishasha jungle lodge, Ihamba lodge, Park view lodge, Queen Elizabeth bush lodge.

Activities carried out in Ishasha sector.

Game drives. Gamed drives in Ishasha sector are carried out twice in a day and these are being carried out using the 4×4 safari vehicle which offers good views of the attractions. Ishasha sector is an ideal and excellent place for game drives as its not mostly visited compared to other parts of the park so there will be few safari vehicles and less crowds therefore visitors get more time to spend with the tree climbing lions. During the game drives different attractions will be observed like the birds in the area, tree climbing lions and other animals in the area include; the antelopes, Uganda kobs, elephants among others.

Cultural encounters. This involves exploring the natives cultures like the Bakiga culture. This involves learning more about the lifestyles, traditions of the locals. Visitors will be entertained by the locals with their tradition dances and songs.

Community tours and walks. These involves hiking into the near by communities and interacting with locals. Tourists interested in these walks will get a chance of being entertained with the locals with their stories, legends, songs and dances. During these community tours tourists will get involved in the day to day activities like harvesting food, visiting plantations, learning how to brew local drinks, will earn hand craft skills since they get involved in the process of making them.

Ishasha sector is known and loved for its amazing game drives experiences which are carried out in the circuits of the sector which is the North circuit and south circuit.

South circuit. This is difficult to navigate through as it consists of many places to get bogged on this circuit and it is 20km in length

Note: It is always advised for you to always go on the game drives with professional guides since they are well conversant of the place so as not to get lost in the area.

North circuit. This is easily navigated and it’s a 20km in length which passes through the KOB breeding grounds on L. Edward. It is rated the most productive for spotting the lions as the lion stick to the kobs since they prey on them and a 10km road extending North from the road loop leads to marshy shores of Lake Edward a good sight spot for the water birds like Herons, Storks, Plovers, Shoebill, Flamingoes.

When to visit Ishasha sector of Queen Elizabeth.

Ishasha sector of Queen Elizabeth receives rainfall any time so it is not guaranteed that it won’t drop at all. But there are months known to be wet and dry. Wet season is when the park receives rainfall almost every day and these are during the months of March, April, May, October and December. The months of October and November are the wettest month implying rainfall is heavy and they receive long rains. This makes the roads and trails impassable due to the slippery, slick and muddy road. Over grown vegetation  which makes hiking through the area difficult and over shades the attraction thus obstructing them giving unclear photographs.

Dry season. This is when the park does not receive rainfall or when it does it receives very little rainfall. This season is in the months of December, January,  February,  June, July, August and September. This means that the park roads are dry and easily accessed both on foot and cars, the vegetation is short since the soils are not so fertile. This gives clear views of ty attraction and photographs. Therefore the best and perfect time for one to visit the Ishasha sector is during the dry season in the months between Dec to Feb and Jun to Sept.

Getting to Ishasha sector of Queen Elizabeth.

Ishasha sector can be accessed using both road transport and by Air transport.

By Air transport. You can get either a scheduled flight or chartered flight offered by the domestic airlines like Aero link from either Entebbe International airport or Kajjansi airfield and land in Kasese.