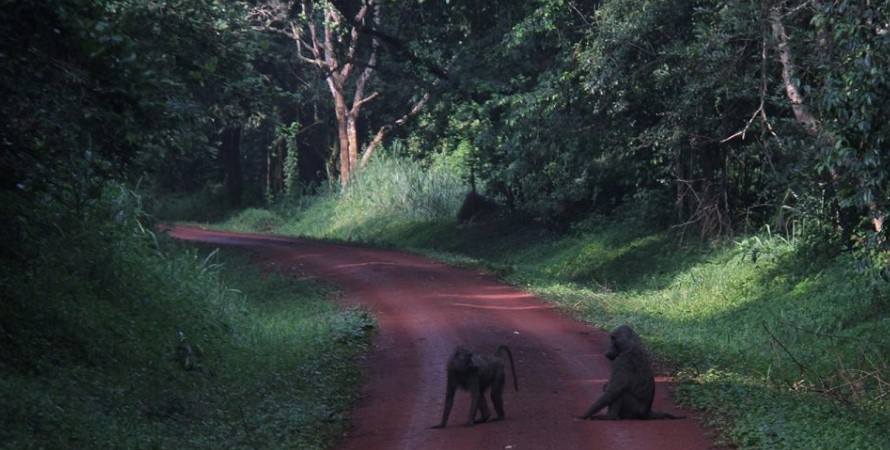 The Kaniyo Pabidi Forest is managed by the Jane Goodall Institute of Research. The forest can be accessed through the Kichumbanyobo entrance gate to the Murchison Falls National Park, and this gate is just 30 minutes from Masindi Town.

Kaniyo Pabidi Forest is found in the north-eastern part of the Budomngo Forest, which is the major forest heart in much of the conservation area. The Kaniyo Pabidi Forest is also occupied by the Mahoganmy forest, and it also has some of the ironwood trees that are characterized by several species of primates, including chimpanzees.

Chimpanzee trekking is the highlight of the Kaniyo Pabidi Forest, and as you do the chimpanzee trekking in this great park, you can also include the walks to Kaniyo Pabidi Forest to see other species, which include the red-tailed monkeys, the white and black monkeys, and the nocturnal primate group, which, among others, includes the pottos, and this is very interesting.

The monkeys enjoy swinging on the limbs of big mahogany trees, and during the tearing season, the primates also harvest organic items off the trees. Despite this, the timberland is bound by savannah fields and savannah forests. Along the banks of the Wainsoke River, animals such as antelopes, buffaloes, waterbucks, bushbucks, duikers, and hippos live in the savannah environment.

The bird watching safaris in Kaniyo Pabidi are exceptional because the forest reserve has a lot of bird species, some of which are endemic to this forest, some are rare, while the rest are migratory birds. It is recorded that about 360 species of birds can only be found here in the Kaniyo Pabidi forest reserve.

The endemic bird species here include the ratis iturinis, yellow-spotted flufftails, zoothers, neatrapus, white-spotted flufftails, little green sunbird, white-thighed hornbill, western black-headed pride, and other forest birds found in the forest. You will need to have a birding specialist come and enjoy this great species of bird and make your bird watching safari a memorial one.

When is the best time to conduct bird watching in the Kaniyo Babidi Forest Reserve?

The dry season is advantageous since the trucks are dry and the timberland is not hazardous or unacceptable. In any case, the rainy season, which runs from March to May and August to November, is ideal for bird watching and outdoor walks. You can visit Kaniyo Pabidi Woods at any time of year, but be wary of the weather and the damaged terrain during the rainy season. As a result, you should bring an overcoat and rain boots to be on the safe side during the rainy season.

The major entrance gate to the Kaniyo Pabidi Forest is the Kichumbanyobo Gate. However, additional gates, such as Bugungu in the south, and Tangi and Wankwar in the northern section of Murchison Falls National Park, can also be used to access the forest. It’s worth noting that you may get to Kaniyo Pabidi by ferry from the northern side of Murchison Falls National Park.