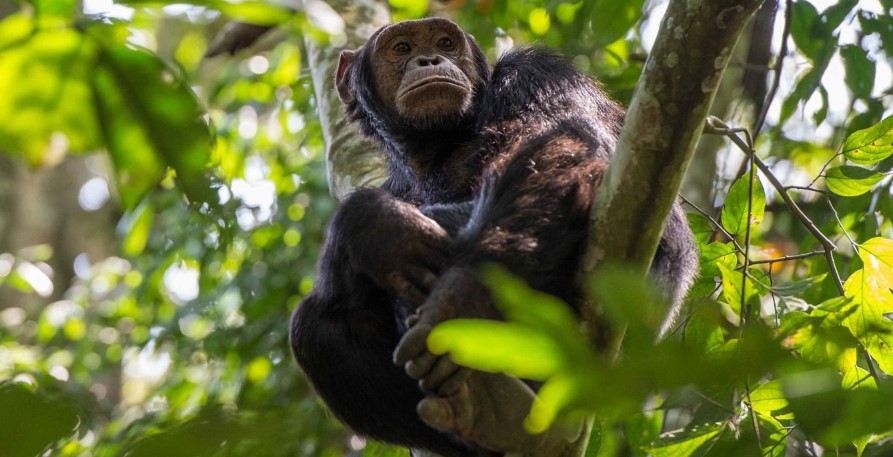 Kibale National Park is located in the Kabarole district of western Uganda and is conserving Uganda’s most evergreen rainforest which is the Kibale forest. The game park covers 766 sq km and is comprised of different landscape patterns, forests which are both montane and low land and it has an altitude that ranges from 3600 ft to 5200ft above sea-level

The park is dominated by mainly one major type of vegetation and a few other vegetation types covering very minute areas of the game park. The park is predominantly composed of tropical rainforest and some parts of swamps and scattered grasslands. Both montane forests and lowland forests are found in the park, giving it over 200 different tree species such as the endangered Cordia millenii, and Entandrophragma Angolense, among others. More common tree species in the park include; ferns, Pollia Condensata, and Palisota among others.

Given the different vegetation and landscape types in Kibale National Park, the park contains various wildlife species that inhabit the different areas of the park. The most popular dwellers of the forest are the primate species and Kibale National Park is home to 13 primate species such as the Chimpanzees, Red-tailed monkeys, Black and White colobus monkeys, L’hoest monkeys, Vervet monkeys, Olive baboons, Blue monkeys, Grey-cheeked Mangabeys, Bush Babies (Demidoff Galago), The Potto, Patas monkey, and the Uganda Mangabey. Other wildlife species present in the park include the Giant Forest hog, warthogs, bush pig, blue, red, and peter’s duiker, elephants, and buffaloes though these two big animals are rarely spotted, bushbucks among others.

Furthermore, Kibale National Park is a birder’s haven and paradise. Given the different habitats in the park such as tropical rain forests among others, the park has recorded more than 370 bird species including 4 unique bird species that have never been recorded in any other Ugandan national park such as the Cassin’s spinetail, blue-headed bee-eater, Nahan’s francolin, and Masked Apalis, a variety of forest species such as the famous African pitta which appears on most of the checklist of birders visiting the park. Don’t miss out on migratory birds from November to April. One of the best birds watching spots in Kibale National Park is the Bigodi Wetland Sanctuary and this experience involves an organized community project where professional and experienced tour guides lead the visitors on a 4-hour trail while bird-watching. Some of the notable birds in Kibale National Park include; the African pitta, Afep pigeon, Abyssinian ground thrush, Grey parrot, Black bee-eater, Black-capped Apalis, Red-faced woodland warbler, Blue-breasted Kingfisher, Blue-headed Sunbird, Brown illadopsis, Brown-chested alethe, Ruwenzori Apalis, Red-chested owlet, Nahan’s francolin, Little greenbul, Yellow-rumped tinkerbird, Crowned eagle, Duskey crimson wing, and the Green-breasted pitta among others. Birding is one of the activities that can be carried out successfully in Kibale National Park.

The local people around the park

There are two major tribes and groups of people who inhabit the area around Kibale National Park. The Batooro and Bakiga which are part of Bantu-speaking tribes are the main groups of local people staying and utilizing Kibale National Park and its resources. The area around the park has attracted dense populations given the different favorable conditions around the park such as fertile soils, and favorable weather conditions among others. The Batooro and Bakiga are naturally hospitable, friendly, and interactive. Visitors should expect genuine smiles as the locals wave at them as soon as they see you.

The park is famously known as the primate capital of the world given the numerous primates in the park, especially the chimpanzees. The Kibale National Park offers the best chimpanzee trekking experiences in the East African region. With a population of over 1,000 chimps, only 4 chimpanzee families are habituated and Chimpanzee trekking involves hiking different trails while tracking down the habituated chimpanzee families. This fascinating activity involves opportunities to view breathtaking sceneries of different wildlife species such as monkeys, and bush babies among others. The Activity furthermore includes opportunities to spend one hour observing the chimpanzee behavior such as their relationships (how they exist), their diet, and their eating intervals among others. Expect unforgettable memories as you engage in this exciting activity as our professional guides from Journeys Uganda ensure you get a satisfactory experience.

This activity takes place in the Bunyaruguru  Ndali- Kasenda crater lakes region which is found in the Kabarole district while approaching Fort portal. This breathtaking activity involves experiences of magnificent scenic views of the 50 different crater lakes in the park and region which are enclosed by steep volcanic slopes that give visitors a challenge before the rewarding experience of exploring the crater lakes. Furthermore, while at the top, visitors shall get a chance to view other different breath-taking sites such as Lake George, Rwenzori ranges, Kichwamba escarpments, and Kibale forest. This activity is carried out on foot and while hiking, ensure to visit Kasenda, Kabata village to see 12 of these crater lakes. Also, still around the same village, endeavor to visit Mahoma falls and enjoy showering at the bottom of the waterfalls. Many of these crater lakes in the Kabata area are famous for example Lake Nninambuga which is printed on the 20,000 Uganda shillings. Other famous crater lakes around the region include Lake Nyabikere which is a famous base for chimpanzee trekking, Lake Nkuruba which acts as an access point to the Mahoma falls and other craters, Lake Lyantonde and Lake Kifuruka among others.

This wetland is situated outside Kibale National Park in Magombe swamp. It is 6 km from the Kanyachu information Center south of the park. The sanctuary is run by the local community and it is among the pro-poor tourism initiatives to support livelihoods around the game park in order to prevent encroachment of the forest and game park. Different activities take place in the Bigodi Wetland Sanctuary and these include birding, Moth and butterfly viewing, seeing primate species such as vervet monkeys, black and white colobus among others

Given the different favorable conditions and vegetation around the park, Kibale National Park is a habitat for more than 370 bird species as mentioned earlier and these include forest species, migratory species, and Albertine rift endemics among others. Some of the top birding sites around Kibale National Park include; Bigodi wetland sanctuary which is the best birding spot around the park, Kibale forest, and the southern part of the park at Kanyachu visitors center where the activity usually starts in the early morning.

This unique activity in Kibale National Park is carried out at night in order to enable tourists to view nocturnal wildlife, and other animals like chimps and monkeys resting and sleeping. Some of the commonly seen nocturnal wildlife include bush babies, night bird species such as owls, tree hyrax, nightjar, forest cats, and sometimes leopards. The activity starts at around 7:30 pm and takes 1-2 hours. Visitors are advised to carry torches, tucked-in long socks, and jackets among others.

The cultural encounter experience involves tourists visiting local communities around the park while observing and learning about their lifestyles, traditions, and norms among others. The local people living around the park are majorly the Bakiga and the Batooro. This activity is carried out by locals who grouped themselves into an association they named KAFRED which is Kibale Association for Rural Environment Development and they entertain the visitors, sell crafts as souvenirs to visitors, and serve traditional dishes to visitors. The activity also involves sightseeing locals’ farms and the magnificent Rwenzori mountains among others.

What is the best time to visit Kibale National Park?

The game park can be visited any time of the year but the best time to visit Kibale National Park is during the dry seasons of the year and these are usually from June to July and December to February. The wet season is characterized by slippery roads hence hindering proper access to all the attractions in the park.

One can access Kibale National Park by either road or Air means of transportation. By road, the park is 337 km from Kampala the capital city of Uganda and it is 26 km from Fort portal. By Air, one should board a plane from Entebbe International Airport or Kajjansi Airstrip which will fly them to any Kasese airstrip or field.

Where is accommodation in and around Kibale National Park?