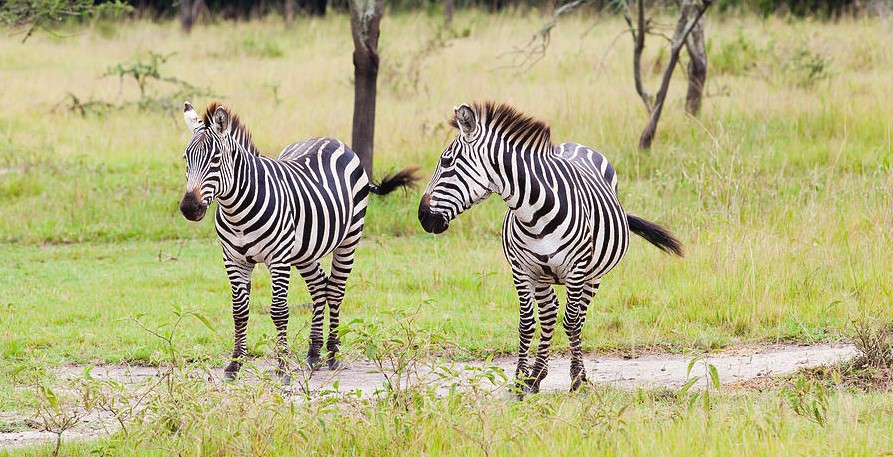 Lake Mburo National Park is the smallest game park in Uganda and it covers an area of 260 km at an altitude of 1,220 – 1,828 meters. The park is located on the road that directly connects Kampala, the capital of Uganda, to the numerous game parks of Western Uganda. It is also the closest game park to Kampala. It is situated between Kiruhura, Mbarara, and Lyantonde districts. The park has 5 different lakes including Lake Mburo together with 13 other lakes that shape the 50 km wetland system connected by a swamp.

In the past, the park has faced very many challenges that have affected and destroyed lots of wildlife species and most of these challenges were a result of human activities such as different attempts to kill the tsetse flies and poaching among others. Despite the different challenges, the park is comprised of very many different habitats which include rock outcrops, savanna, bush, acacia woodland, forest swamps, and lakes. These furthermore act as homes to numerous wildlife species and bird species in Lake Mburo National Park including some species that can only be seen in the park while in Uganda. Interestingly, visitors to the park should not limit themselves to game drives as the park can be explored on foot, by riding bicycles, horseback riding, and by boat.

Despite the fact that Lake Mburo National Park is the smallest park in Uganda, it is a habitat for numerous and surprising wildlife species including over 69 different mammal species and 332 bird species. Also, the park is home to many unique mammal species that are only found in the park, especially herbivores such as the Impala, elands, and Burchell’s Zebra, other species include Topi also found in Queen Elizabeth National Park only, Rothschild’s Giraffes which were relocated from Murchison Falls National Park, Leopards, hyenas, hippos and crocodiles especially around the lakes and swamps in the park, sitatunga antelopes, bush backs, jackals, warthogs, Elephants, Wilder beast among others

Given the location of Lake Mburo National Park which lies between Lake Victoria and the great Rwenzori Mountains, the park is situated in a rain shadow and receives around 800 mm of rain per annum hence receiving most rains from February to June and short rains from September to November. The average recorded temperature of the park is 27.5 degrees Celsius and July and August happen to be the hottest months of the year in the park.

Sportfishing: This is one of the exciting activities that take place at Lake Mburo National Park and can be carried out from all the thirteen lakes in and around the park. It involves the actions of fishing for fun, hobbies, and sometimes as a competition. Majorly, sportfishing is done at Lake Mburo since it’s the largest. During this exciting activity, visitors are reminded to carry fishing equipment and also book fishing permits from Uganda Wildlife Authority. The different fish types found in the lakes include Lungfish, Tilapia, and Mudfish among others.

Game viewing in Lake Mburo National Park: This activity of game viewing can be carried out in many different and unique ways of exploring the park such as the use of mountain bikes, foot, boats, cars, and on a horseback.

Lake Mburo boat trip: This is one of the most exciting activities in Lake Mburo National Park and visitors usually prefer traveling using speed engine boats while exploring the magnificent Lake. The is gifted with aquatic wildlife such as hippos, crocodiles, and different aquatic bird species. Certain boat cruises are aimed at those going for sport fishing. It is also a great opportunity for bird lovers to spot different and unique bird species such as the Prehistoric Shoebill among others. The activity does not take long on the water since the park follows a specific program. The activity is best carried out during the drier seasons of the year when the lakes are easier to control. The activity starts from the Lakeside campsite near Rwonyo Rest Camp and it takes only 2 hours

Game drives in Lake Mburo National Park: The park has a network of game viewing tracks that enable visitors explore the beautiful swampy and savannah plains while on the eastern hinterland of Lake Mburo. The hinterland is a home to different savannah animals and birds such as Antelopes, Elands among others.

Horseback Safaris: This activity is operated by Mihingo Lodge and usually takes place in the eastern of Lake Mburo National Park where visitors explore the grassy ridges on horsebacks.

Salt Lick Walk: This activity involves guided nature walks as visitors explore the park around Rwonyo including a visit to the natural salt lake . Expect to view different wild animals and birds while on the Timber observation platform

Mountain Biking: This activity is operated by Leopard Tail Rest Camp and Rwakobo Rock and usually start from the Nshare gate. It involves opportunities to view savannah animals grazing such as Zebras, Buffaloes, Impalas, Elands and different bird species.

Forest Walk: This activity takes place on the western side of Lake Mburo and it is a small tract through a forest and is a habitat to numerous forest bird species such as the ……..

Local People: The people around Lake Mburo National Park are dominated by the Banyankole tribe who are traditionally cattle keepers  and cultivators. The Banyankole people are divided into two groups which include the Bahima who are traditionally cattle keepers and the Bairu who are cultivators. Expect to see herds of long horned cattle around the game park. These groups of people are naturally hospitable and this will be seen by their beautiful smiles as they wave good bye to visitors.

Lake Mburo National Park is the closest game park to Kampala the capital city of Uganda at 228 km and by road, it taks 3 and ahalf hours to reach the park. The park lies between the towns of Masaka and Mbarara via the road that links Kampala to Bwindi in Kabale and the Rwanda border. Three gates enter the park and these include; Kyanyanshara gate next to the luxurious Mihingo Lodge 14 km west os Lyantonde, Nshara gate which is 500 meters west of Akagate , the Sanga gate which is 13km from Akagate  trading center.

What is the best time to visit the park?

Lake Mburo National Park can be visited any time of the year but the best time to visit the park is during the dry seasons of the year which is usually in September to December.

Where can one get accommodation around Lake Mburo National Park?