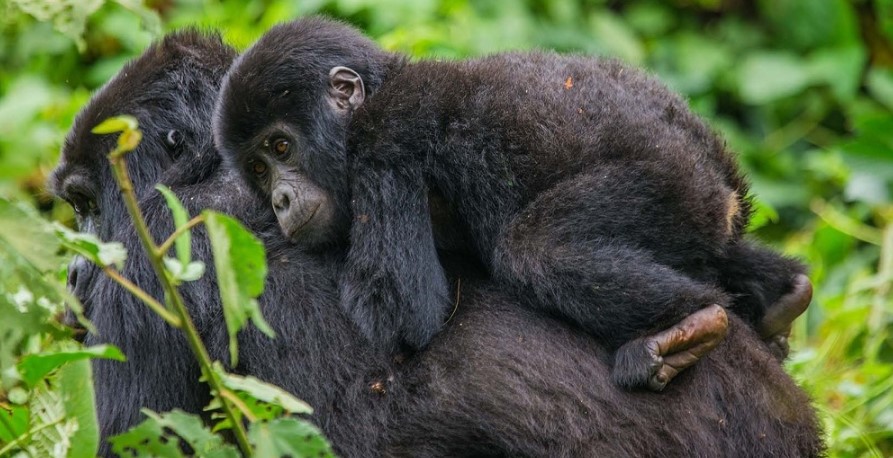 Mgahinga gorilla national park was gazeted to protect the endangered mountain gorillas and conserve nature therefore the park is governed by the Uganda Wildlife Authority. Mgahinga national park got its name from the Kinyarwanda word Gahinga which means pile of volcanic lava stone heaps where cultivation.

Mgahinga national park is a home to 76 mammals species like the forest elephants, buffaloes, bushbucks, golden cats among others.

Gorilla trekking: This is the main activity that is carried out in the Mgahinga national park the mountain gorillas being the star attraction of the park. Gorilla trekking in Mgahinga starts very early in the morning  with the briefing about the rules and regulations at the park headquarters and then tracking begins and tracking the gorillas starts at Ntebeko trekkers are accompanied by the guides and park ranger. Trekking in Mgahinga national park requires one to be physically fit and okay since its quite challenging when you have to move deep in the forests, valleys and the steep slopes,  length or time spent tracking could take 30mins and more hours o even take a full day since the mountain gorillas keep moving from one place to another in search for the food. Once a particular gorilla family is tracked then a period of one hour is allowed for the tourists to spend with the gorillas and this will help them to learn about their habits, behaviors and lifestyle, taking photos and recording moments.

Mountain climbing: Since Mgahinga national park has three mountains where mountain climbing experiences can be enjoyed from and these are mount Gahinga which is the smallest amongst the three and hiking this mountain takes about 6 hours and hiking is done in the bamboo forest as you reach at the top you will find a crater lake filled with swamp and giant lobelia and the distance covered is about 8 kilometers.

Mountain Sabinyo: Sabinyo word mean Old man’s teeth. Mount Sabinyo is 3669 meters and hiking this Mount takes about 8hours while you hike mount Sabinyo you will find and pass through the steep ridges, dense forest with Afromontane vegetation giving you opportunities to observe the scenic views of primates like golden monkeys,  animals like duikers, forest elephants and different bird species like Ruwenzori batis, Brown crowned Tchagra among others.

Mount Muhavura: The word Muhavura means guide. This is the highest mountain amongst the three found in Mgahinga national park with an altitude of 4127 meters above the sea level and hiking this mountain takes about 10hours covering 12 kilometers. Hiking mount Muhavura you will pass through different vegetation zone and the beautiful scenic views of the Virunga volcanoes, Queen Elizabeth national park, lake Edward, mountain Rwenzori ranges, Bwindi impenetrable national park.

Nature walks and hiking: This is done around the edges of the mountain and it is an interesting activity which involves hiking around the wild vegetation, bamboo forests, Rugezi swamps which rewards with the chance of seeing the beautiful scenic views of the lakes like lake Mutanda one of the attractions found in the Mgahinga National park, mountains like Muhavura mountain, Sabinyo and Mgahinga mountains plus the views of mountain Rwenzori, agricultural areas, birds with the park, animal, primates and the Batwa people.

Cultural tours: The Batwa cultural experience trail is such an interesting activity in Mgahinga which involves learning and exploring about the culture of Batwa people. Before the park was gazzeted the reserve used to be a home for the Batwa people so this trail experience gives you chance to discover, know and learn about the culture, tradition, lifestyles of the Batwa people. How they used to live in the forests, gather and harvest food, ancient ways of hunting, making of hand crafts like the cups made out of the bamboo, visiting the Garamba cave. Visitors will also be entertained by the locals with the tradition and cultural dances and songs,  stories and legends will be told therefore at the end of the day tourists will be having insights of the Batwa culture.

When should one visit Mgahinga National park?

Mgahinga national park does t have limits of when tourists should visit therefore one can visit any time all year throughout. But its irs always good to visit when its most favorable with good conditions and this happens in the dry season which is seen as a the peak seasin in the park. During thi time the park flocks with many of the tourists and this is seen in the dry days where the park doesn’t receive rainfall or receives less rainfall which is in between the December to February and June to September. Since there is not much rainfall that is if it rains the park pathways are always easy to accessed because they are dry, the vegetation in the park isnt over grown which enables tourists to clearly see the attractions and get clear photography and very easy to hike through the forests.

One can also visit the park during the wet season though should note that this comes with son challenges registered like the impassable roads and trails due to the heavy and constant rains which make them wet, muddy, slippery and slick which causes difficult in hiking through the park and passing through the roads since there are some rough ones. Over grown and dense vegetation which end up obstructing the attractions and also making hiking difficult. So for easy, fun and unforgettable experience its always best to visit the park when the season is dry.

There is a wide range of the accommodation facilities catering for all classes of tourists from budget, midrange and luxury. All of these offer good services to the clients and they are in forms of hotels, campsites, Bandas, cottages and offer services like gardens which give views of the Mountains, the park and some attractions. It is always good to choose a place of stay that is close to the park headquarters since gorilla trekking starts very early in the morning so as not to miss out on the briefing. Accommodation includes Mgahinga community camp, Muhabura motel, Mount Gahinga lodge, Mount Gahinga rest camp, Mucha hotel, Kisoro tourist hotel, Kisoro travellers inn, Amajambere Iwacu community camp, Bwindi jungle lodge, Lake Mutanda campsite, Travelers nest hotel Kisoro, Virunga hotel, Mutanda lake resort, Clouds mountain gorilla lodge, Nkuringo safari lodge. There are many places to state in while in Mgahinga for more information and bookings contact us @infojourneysuganda.com.

Mgahinga national park is endowed with many attractions and the star attraction being the  mountain gorillas which are over 100 in this area, the second attraction is the golden monkeys which are harbored in the park. In addition Mgahinga has other primates that you will be coming across of when you visit and these are the white and black colobus monkeys, L’Hoests monkeys, Red tailed monkeys among others

The park shelters over 115bird species in the habitants therefore this attracts birders to come an visit and here are some of the birds that you will observe in Mgahinga National park Kivu ground thrush, black kite, blue headed coucal, Olive pigeon, Rwenzori turaco, handsome francolin, Rwenzori nightjar, mountain masked Apalis, Dwarf honeyguide, Pin tailed Whydah among others.

Other attractions in the park are the Batwa people, Vegetation in Mgahinga,  and the animals found in Mgahinga which include the forest elephant, black fronted duikers, bush bucks, buffaloes, golden cats among others.

The park is 510km away from Kampala the capital city of Uganda and can be accessed to by both road and Air transport.

It is approximately 9 to 10hours drive from Kampala to the park which is around 8 hours drive to Kabale town covering 434 kilometers and there are more 76 kilometers to Kisoro town. This route is tarmacked and abet mountainous and steep.

Alternatively you can use the route from Kabale town passing near lake Bunyonyi joining the Kabale Kisoro tarmac road from Kisoro head to the park which is around 14 kilometers to Ntebeko the park main entrance. Its advisable to use 4×4 vehicle.

Those coming from Kigali will go to book a flight and depart from the Kigali international airport and go through the border of Cyanika then connect to Mgahinga national park by road and this will take about 3 to 4 hours drive.

This involves booking with the domestic airlines either from Entebbe international airport or Kajjansi domestic airfield. Here you can either book a chartered flight or scheduled flight and you will land in Kisoro airstrip after there you will connect to the park headquarters by road.