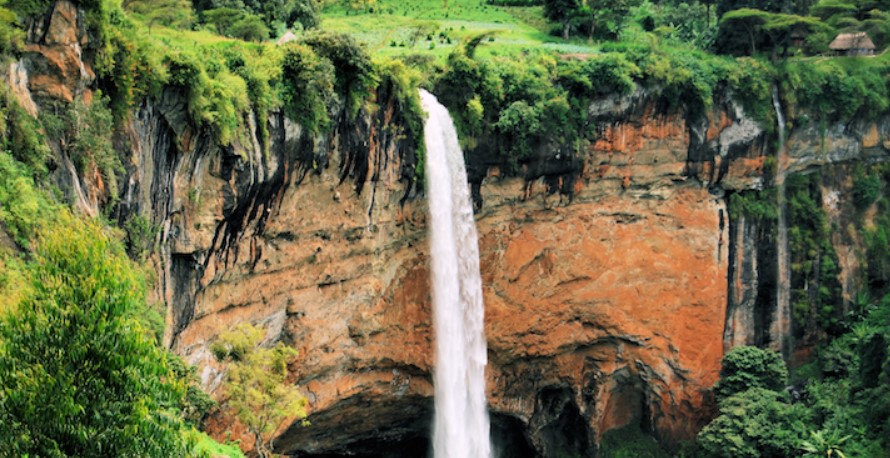 Mountain Elgon National Park is located in the far east of Uganda and it is found along the Uganda –Kenya border. The park consists of a Volcanic Mountain Elgon and the largest caldera in the world which is about 40 km2. The extinct volcano is one of Uganda’s oldest mountains and it first erupted about twenty-four million years ago.

The now dormant volcano was once thought to be Africa’s highest mountain, it is said to have been way higher than 5,895m of the block Kilimanjaro in the neighboring Tanzania but due to the different massive erosion processes, it has reduced to now 4,321m dropping it position to the 4th highest peak in East Africa and the 8th in the world.

Furthermore, mountain Elgon national park is known to have the largest volcanic base in the world and it is also known as the largest and oldest solitary volcanic mountain in the East African region. The mountain in its vast form is 80 km in diameter and rises over 3,200 over the surrounding flat lands and plain lands. The higher parts of the mountain are where most of the different species of flora and fauna seek refuge. The park mainly protects the higher slopes of the Mount Elgon as the lower slopes are occupied by the different local communities that mainly and directly survive on the mountain and its resources. Furthermore, different rivers bisect the mountain and are very important sources of water to the wildlife and the neighboring local communities these include river sironko and river manafwa etc. The park also has got a conducive climate that is wet almost throughout the year. The higher parts of the mountain are protected by both governments of both Uganda and Kenya which creates an extensive trans-boundary conservation area which has been declared a UNESCO Man and Biosphere Reserve.

Mount Elgon National Park is a habitat to over 300 bird species including the most endangered ones on the IUCN red list such as the Lammergeyer can be seen flying over the Caldera and the Suam Gorge.   Other bird species include Taccazze sunbird, Jacksons fracolin, black collared Apalis, eastern bronze napped pigeon etc. The park consists of the 40 restricted range species, furthermore, 56 of the 87 afro tropical biome species exist here especially the moustached green tinker bird, the moorland Francolin and the Alpine Chat. Mount Elgon bird species can be experienced from different parts of the park and some of the most excellent viewing spots in the park include the Kapkwai forest Exploration center, some of the most common bird species to be spotted here include the African Goshawk, African Blue fly catcher, Chinspot Batis, Dohertys and Luhdurs bush shrikes, Cinnamon bee- eater and Hartlaub’s Turaco.

Besides the numerous bird species in Mount Elgon National Park, the park is a home to different tourist attractions such as the different wild animal species in the park such as the elephant which inhabit the varied vegetation cover along the mountain slopes, buffaloes, Oribi, Defassa’s waterbuck, Duiker, spotted hyenas, squirrels and primates such as the white and blue colobus monkeys. Other attractions in the park include caves, rocks, waterfalls, rivers, Caldera and Jackson’s pool. Some of the major activities in the park are hiking, bird watching, Day and Night nature walks, sight-seeing, coffee tours, Rock climbing, Mount Elgon Bushiyi excursion trail and mountain biking.

Hiking is one of the main activities that cannot be missed when one is at Mount Elgon National Park. This is mainly because of the fact that the Park has no roads for game drives but has foot path trails that are hiking and nature walk trails. Hiking in Mount Elgon National Park is one of the most exciting and a better alternative to climb compared to other places for climbs in East Africa. This is mainly because reaching the peaks of Elgon requires no special equipment or technical assistance. There are four major climbing trails in the park that take you to the Wagagai peak and these include The Piswa trail which is the longest trail to the Wagagai Peak and it takes a distance of 49 kilometers. It is also the easiest and less strenuous trail to the peak. The Sasha trail is the shortest and the most strenuous trail to the top of the Wagagai peak. Other trails include the Bushiyi trail and the Sippi trail, this is the longest trail and it starts at 2,050m at Kapkwai Forest Exploration Center passing through the western mountain side through the Tutum cave to enter the Caldera and then the Wagagai peak. One is also advised on hiking or to go on a nature walk from Budadiri to Sasa river camp. The various trail can be combines in such a way that of ascending the Sipi/Piswa/Sasa trail and descending via the Sasa/Sipi trail. This may for example enable a visit to the caldera as well as a visit to the hot springs.

Mount Elgon national park consist of majorly two local tribes of Uganda. The park boosts of a rich cultural attraction and activities that these two tribes practice as they are very unique and only found in eastern Uganda. The Bagisu/ Bamasaba who speak Lugisu a bantu language and the Sabiny people who speak Sebei a Nilotic language are the two groups of locals that practice the local cultures in and around Mount Elgon National Park Uganda. The Bagisu commonly carry out the Imbalu festivals every even year and the main ceremony is usually held at the Mtoto cultural site and adjacent to the ceremonial hut, is the district administration block. The Imbalu is a circumcision festival that ushers Bagisu boys into adulthood. This one of the activities that a tourist interested in authentic cultural experiences should never miss on their visit to Uganda. Be keen to visit the different Local Cultural museums in Kapchorwa the biggest town of the Sabiny for example Sebei Cultural Centre to have a full cultural experience which involves preparing and eating local food, songs, traditional dances and souvenirs such as articrafts. These two groups of people are naturally hospitable and welcoming people. The Sabiny are well known Athletics world champion and Olympic champions with the likes of Joshua Cheptegei and Steven Kiprotich among others. While in Kapchorwa, ensure to visit the Joshua Cheptegei Training sports Facility and the National Altitude Training Center Teryet, this may reward you an experience with the former, current and future Olympics and world champions.

Hikers are advised to always be physically fit enough in order to conquer peaks of this vast mountain. This is mainly to avoid and prevent altitude related sicknesses and any health complications. Also, the travelers are cautioned about the best times on when one can be guaranteed of a satisfying experience. The best time to visit the park is mainly during the dry season for easy access to all parts of the park and this dry season is usually from June to August and from December to March. On the whole, Mount Elgon can be hiked at any time of the year.

All travelers should note that Mount Elgon National Park is a wilderness without roads and can only be explored on foot. You can also try out making your trans-boundary adventure, which involves you ascending the Ugandan slope and descending on the Kenyan side. The crossover point during this adventurous activity is at the hot springs and the visitors should have made a prior arrangement with the Kenya wild life services rangers.

Mount Elgon National Park is situated in the far east of Kampala approximately 236km while passing via Jinja another tourism city in Uganda, Iganga, until Mbale the biggest town close to the National Park. One can reach the park by either road or air means of transportation. By road, it takes 4-5 hours to reach Mbale town where one needs to drive on dirt roads for a few kilometers to reach the various trail heads. By air, one will have to use the Kenya Kisumu Airport which takes approximately one hour. It will take 50 more minutes to reach the National Park. Travelers can use the scheduled flight that runs all safari flights to Kenya through Air Kenya Express or use domestic charters.

After an exciting, interesting and fun packed day of activities, one should be sure of a comfortable accommodation spot around and within Mount Elgon National Park whether luxurious, mid-range or budget travelers. Some of the best accommodation and hospitality spots in and around the park include the following; Sippi Travellers Lodge and is one of the most luxurious lodges on the foot hills of Mount Elgon, for budget travelers, Mt Elgon Spar and hotel which cost roughly Ush 500,000, Kapkwai Cottages.