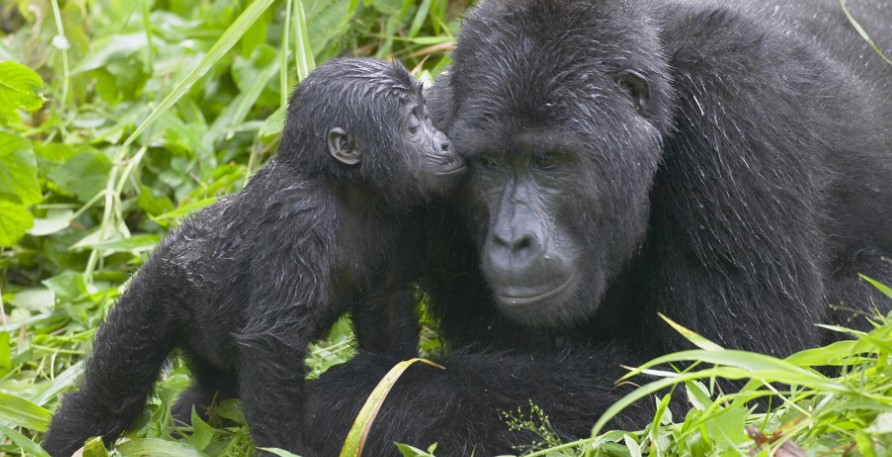 Mountain Gorillas in Bwindi; This unique and rare wildlife habitat is located in the southwestern part of Uganda, along the western border of the Democratic Republic of Congo next to Virunga national park at the edge of the Albertine Rift. Bwindi Impenetrable national park is approximately 331 square kilometers on land.

This unique habitat is characterized by rolling hills and thick vegetation types that are known as the ancient forest of Bwindi that is impenetrable. Also, Gorilla trekking is a major activity in the game park given its favorable available conditions for mountain Gorillas to survive. This unique, thrilling, and fulfilling experience leads one to appreciate the hidden treasures of Uganda The Pearl of Africa

Known amongst the largest and most attractive national parks in Uganda on both lowland and montane forests, the park can only be accessed on foot.

The park inhabits half of the world’s population of endangered Mountain Gorillas [340] hence Gorilla tracking the major tourist activity in Bwindi’s Impenetrable forest, 36 Gorilla families in the park, 17 Gorilla families are habituated and trained to the presence of human beings. Also, only 8 people are allowed to track each gorilla family mainly to prevent the risk of passing diseases from tourists to the humble giants. Furthermore, each visitor should maintain seven meters away from the Gorillas. In case of a situation where the Gorilla is closing in, one should be alert enough to move away and also follow all the guide’s instructions. While Gorilla Trekking, everyone should endeavor to keep their voices low while communicating in order to keep the visited Gorilla family relaxed. No visitor is allowed to drink or feed while with the Gorillas. This activity starts with a briefing by a game ranger and the whole activity usually lasts 2-6 hours.

For anyone to enjoy trekking the Gorillas, he/she must obtain a Gorilla tracking permit from the Uganda Wildlife Authority which is the governing body in charge of all game parks in Uganda. A Gorilla permit currently costs $700 including park entrance, park rangers, and great memories in general. Access to the forest sectors of the park including Rushaga, Buhoma, Ruhija, and Nkuringo will guarantee one a Gorilla Trekking experience. This unique park and activity can take place amongst multiple Gorilla trekking families and sectors, so tracking Gorillas twice depends on ones’ interest since all Gorilla families and sectors are open for gorilla trackers each day. An individual may decide to track different Gorilla families in different sectors of the game park. One should note that each Gorilla family is unique and has got several attractive features for example multiple/many family members, slow forest movement, and baby Gorillas. However, different tourists prefer different choices as some may prefer traveling long distances while others may not be able or prefer trekking for long distances. Some prefer watching and observing female Gorillas with their baby Gorillas.

Mountain Gorillas are listed on the IUCN red list of endangered species with a total population of 650 members. Currently, there are no Mountain Gorillas under captivity as previously recorded in the 1960s and 1970s. Other activities carried out in the park include; primate walks expecting to see the black and white colobus monkeys, chimpanzees, and forest elephants. The most preferable time for Gorilla trekking is from June to September as well as from December to February. Although the park can be accessed any time throughout the year, this furthermore calls for low turnup seasons hence a drop in the price of the Gorilla permits. Generally, there is a slight difference in the seasons.

Bird watching is another activity not to be missed out on while at the park, the park consists of different bird species totaling 346 species and 90% are Albertine rift endemics. Experienced birdwatchers can spot over 100 bird species per day. Community walks will include a visit to the Batwa people who first lived in the forest and depended on the forests while fishing, harvesting wild yams and honey. This is also an interesting time involving storytelling, traditional dances, and poems from locals.

On the whole, these humble, unique giant apes are and can be visited throughout the year-round, although the dry season is more favorable since the roads are more accessible. The park retains much of its treasures through conservation and local community support. This reduces pressure on the park resources from the community. For example, the coffee in Buhoma is by locals, a pro-poor tourism initiative supported and funded by visitors. Happy Travels to the Pearl of Africa.