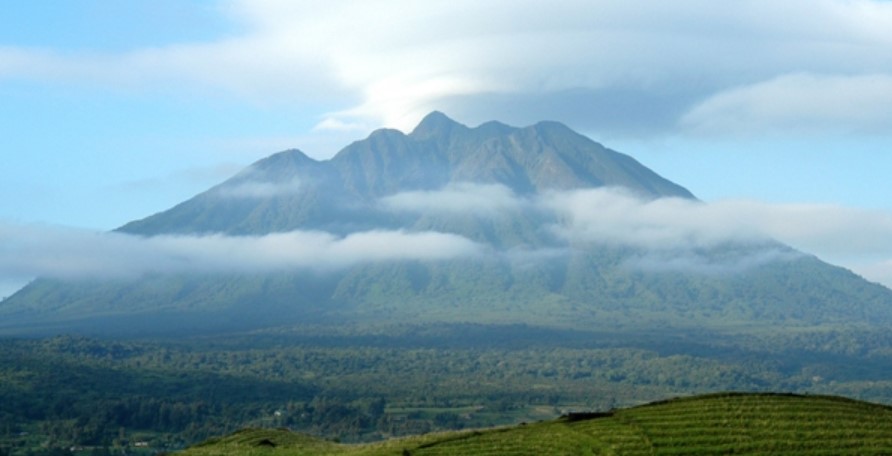 Mountains in Mgahinga National Park: Mgahinga is found in the south western part of Uganda in Kisoro district and it was created in 1991 with the aim of protecting the mountain gorillas and conserve the nature. This park is the smallest park in Uganda and among the three which are in the Virunga massif covering an area of 33.7 square kilometers.

Mgahinga national park is a home to over 100 endangered mountain gorillas having two habituated gorilla families, has over 115 bird species, 76 mammals like the forest elephants, golden monkeys, bush bucks, leopards, buffaloes,  the three mountains which are among the Virunga mountains which covers 3 regions which includes the south western part of Uganda which covers the Mgahinga national park,  the Eastern part of DRC covering the Virunga national park and the North western part of Rwanda which covers the Volcanoes national park. The Virunga mountains apart from the three extinct volcanoes in Mgahinga there are other distributed volcanoes of the Virunga mountains and these are found in the three countries that is Uganda, Rwanda and DRC and these include:,  Mountain Nyamuragira, mountain Nyiragongo, mountain Mikeno found in the DRC, Mountain Karisimbi, mountain Bisoke located at the border of Rwanda and DRC, Mountain Sabinyo, Mountain Gahinga and Mountain Muhavura found at the border of Rwanda, Uganda and Democratic Republic of Congo. Apart from Mountain Nyamuragira and mountain Nyiragongo which are still active all the 6 mountains are open for hiking.

Mgahinga has three mountains and these include; Mount Gahinga, mountain Sabinyo and Mount Muhavura.

The vegetation across is Afromontane with bamboo composing the main vegetation. The Bambi forests on mountain Gahinga are habitants to the endangered mountain gorillas, several animal species, bird species and primates and hiking on the bamboo zone and the trail ladder to access the middle of the swamp will offer the attractions mentioned earlier.

Mountain Gahinga is the easiest one to hike amongst the three mountains found in Mgahinga taking about 6hours around trip on the loop trails which leads to 180meters wide swamp which covers the crater lake on top. Mountain Gahinga derives its name from the Kinyarwanda word Gahinga which means the pile of volcanic stones which surrounds the local farmlands on its lower slopes.

The hike on mountain Gahinga starts in the recently farmland and winds up to the edge of the virgin forest. The hike on the steeps is not uncomfortable and even when it doesn’t rain it can get damp as  fog rolls in and out over the mountain. The scene is both breathtaking and intriguing as you will see the great bamboo, forest elephant foot prints cross the trail,  earthworms long as your forearm on the ground, bird species and the wet environment.

Mountain Sabinyo is the second highest with an altitude of 3669 meters and hiking this mountain takes about 8hours since the distance from base to top is about 14km long around trip. As you hike you have to follow the route along the steep ridge up until you get to the peak. Hiking Sabinyo is 6 kilometers long and it goes along an amazing mountain stream which meanders through the dense forest covered by mainly the Afromontane vegetation all the way to the gorge. And this hike is very rewarding and it seems tiresome but at the end of the trail you will be amazed with the view of the trail you will be amazed with the view of the ragged peals of Sabinyo and you will meet attractions like primates such as the golden monkeys, small antelopes like the duikers and other mammals. The bird lovers will enjoy since they will b able to see  a number of bird species like the Rwenzori Turaco being the commonest. The Sabinyo gorge hike will take you through the thick forest until you get to the Sabinyo Gorge which is a good destination for birding and you will go through Rugezi swamp where you see many lovely birds. While at the top of mount Sabinyo you I’ll be seeing the three countries that is Uganda, Rwanda and DRC.

The word Muhavura means Guide. This is the highest of the three mountains in the Mgahinga national park with an elevation of 4127 meters above the sea level and hiking this mountain takes about 10hours covering up 12 kilometers. While on the hike on this mountain you will pass through the different vegetation zone and it will earn you the beautiful scenic views of the Virunga volcanoes, Queen Elizabeth National park, Bwindi Impenetrable national park, Lake Edward, Rwenzori mountain among others.

Hiking one of these Volcanoes doesn’t require a lot of experience however it depends on the visitors fitness level,  the experienced Uganda Wildlife Authority guide helps you to choose the right trails.

What to pack while going for mountain climbing in Mgahinga national park.

Hiking boots of the light weight.

Water proof back pack and a rain coat coz it might rain any time.

Camera with extra batteries and a pair of binoculars to help you see distant attractions.

Other attractions that can be seen in Mgahinga national park.

Mgahinga has other attractions apart from the three volcanoes an these include the Mountain gorillas which are the main tourist attraction in the park. These are harbored in the forests of the park and the park has over 100 mountain gorillas. Mgahinga has two of the habituated mountain gorilla families that are available for gorilla trekking. In addition there are golden monkeys and therefore golden monkeys trekking is being carried out and it it only in Mgahinga where you can go for golden monkeys trekking. Other primates found in Mgahinga include the black an white colobus monkeys, L’Hoests monkeys,  blue monkeys among others

Animals like the jungle elephants, buffaloes, giant forest hog, Bush bucks among others will be observed. There are other attractions like the Batwa people, Crater lakes, Lake Mutanda, Vegetation zones in Mgahinga.