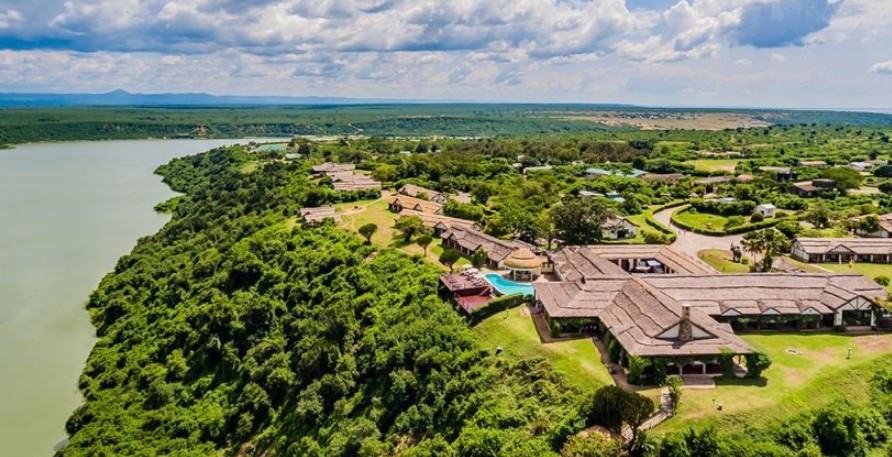 Mweya peninsular is one of the sectors in Queen Elizabeth National park where different attractions in the park can be observed. Mweya peninsular is the Rwenzururu sub region of Kasese district and among the most visited region within Queen Elizabeth National park  situated in the Northern bank of Kazinga channel which connects lake George and Lake George in the Western rift valley interestingly it is bordered between Uganda and Democratic Republic of Congo that runs in the middle of Lake Edward.

Historically Mweya peninsular was formally human settlement that dates back close to over 50,000years and Stanley was the first explorer to reach Mweya peninsular in July 1889 and when he reached he wouldn’t see anything but a formless void which was caused due to smoke from the Bush clearing fire. Mweya during that time had over 81 huts and number of goats and sheep.

In 1891 when Fredrick Lugard cane he found out that the hut had been destroyed which happened way back before Lugard turning to Mweya peninsular. At first they said that the area was closed from the human settlement due to the Rinderpest out break in the are. Later on in 1952 the park was gazeted for wildlife and it was renamed Kazinga National park to Queen Elizabeth National park after the visit of the Queen Elizabeth 11 to Uganda. To date the Mweya village has over 400 people in its major tourist area within Queen Elizabeth and has communities of people that make up the population in the area.

Mweya peninsular is a chunky grass cover with dense vegetation dominated by the candelabra and thorny bushes and is a focal point for beauty in the Northern part of the park. Mweya peninsular has well maintained game drives tracks such as the channel track all the way down to Katunguru gate then goes through that Kabatoro gate which has thick dense vegetation which makes game viewing quite different in the area. It is always good to have a professional guide cos following the sign post in the area may be abit challenging and may end up loosing track of the way in Queen Elizabeth National park which is found in the south western part as home to over 600 bird species and its an Important Birding Area, 95 mammals like leopards, lions and It has a cultural and historical heritage.

Wildlife in Mweya peninsular: Due to the dense vegetation in Mweya peninsular, It’s a home to wide range of wildlife including the mammals found in the forests of Maramagambo and animals like leopards, buffaloes, warthogs, hyenas, elephant, antelopes, bush pigs, warthogs, giant forest hog. This area is a perfect spot for nocturnal animals like leopards. Apart from the animals there are primate species in found in the Maramagambo forest like the blue monkeys, Red tailed monkeys, Olive baboons, Pottos, white and black monkeys among others. Mweya peninsular also has the mongoose, reptiles like the Nile crocodiles, snakes like python.

Putting the mammals aside there are over 100 bird species like African skimmer, flamingoes, papyrus gonolek, napped pigeon among others

Maramagambo forest: This is a natural reserve located in  Bushenyi district commonly for the bat experience and It is a home to the primate species like Vervets, animal species like African buffaloes, Bush pigs, pygmy antelopes,  giant forest hog among others. In this forest nature walks can be carried out.

Kazinga channel: Kazinga channel is a 32kilometer long fresh water channel that links lake Edward and lake George named after Queen Victoria’s son king Edward 7th and the successor king George 5th. Kazinga channel is a key feature in Queen Elizabeth National park and a popular area for wildlife tourism with a wide range of animals like hippos, Nile crocodiles, antelopes, elephants, buffaloes and over 100bird species like the greater flamingos, shoebill, among others.

Activities carried out in Mweya Safaris.

Since Mweya peninsular has numerous attractions therefore tourists have many activities to engage in while on their visit in Queen Elizabeth National park.

Boat cruise on Kazinga channel: Boat cruise is carried out twice a day that is in the morning shift and Afternoon shift but due to the high demand during the peak season the boat launch can be carried out more than twice and it is an interesting and exciting activity  that can earn you beautiful scenic views of the park and animals the found around like the hippos, crocodiles, buffaloes, water bucks like flamingos, shoebill among others. The boat cruise on Kazinga channel is operated by two operators like the Uganda Wildlife Authority an Mweya Safari lodge. Mweya Safari lodge gives tourists a choice between its comfortable ten seated boat the sunbird and the kingfisher stylish twelve seater boat. Kingfisher allows you to travel in luxury providing refreshment and canopies to protect you from the heat. Both trips cost around 30 dollars per person and it lasts for 2 hours.

Game drives: Mweya peninsular has severak game track followed on during the game drives and these are carried out twice a day that is in the very earl morning and late afternoon when the animals are most active and the sun is not too hot. Game drives are a little challenging due to the dense vegetation that covers Mweya Peninsular but booking with the Journeys Uganda will ensure that we get you good trained and knowledgeable guide who knows the best trails to have the best wildlife viewing experience. During the game drive expect to see a wide range of mammals like hyenas, leopards, warthogs and among others.

Mongoose tracking: Mweya peninsular is a home to over 400 mongoose and it is where mongoose tracking can be carried out. Mongoose tracking is a unique experience for active adventures and tourists will be joined by a professional guide and a team of researchers who will use their expertise to track the mongoose. This activity takes about 3 hours and the guide will be providing you with all the information about then the learning more about the behaviors, habits and characteristics of the banded mongoose and rodents. During this activity you will be able to see other attractions in the region like animals, birds.

Forest nature walks and tours: This involves hiking through the forests to explore more about the vegetation, flora and fauna and the different attractions in the area. Therefore this will be done following the trails with the trained guide to lead you through out the walk. Different bird species, animals will be observed.

Things to put into consideration before you visit Queen Elizabeth National park.

These include the rules and regulations governing the activities engaged in while on a safari to the park and these are as follows;

Mweya peninsular of Queen Elizabeth National park can be accessed to by both air and road transport.

By Air transport: You can choose to book a flight from either Entebbe international ariport or Kajjansi airfield a domestic airfield with domestic airlines operators like Aero link. These can b either chartered flights or scheduled flights and these will be landing in Mweya airfield.

By Road transport: From Kampala the capital city to Mweya peninsular it takes 7 to 8 hours and is located 20km west of the road that goes to Mbarara to Kasese town.

Where to stay in Mweya peninsular?

There are different places to stay in while on a visit in Queen Elizabeth national park in Mweya peninsular and these include; Mweya hostel and cottages, Mweya safari lodge, Hippo lodge, Jacana safari lodge.

Mweya peninsular is visited any time all year round but there is a favorable time with favorable conditions and this is in the months of December to February and between June to September. These months are regarded as the dry season therefore the roads in the parks and trails are dry and easily navigated unlike during the wet season which has wet, slippery, muddy and slick roads and pathways. The overgrown and dense vegetation which hinders the clear views of the attractions and photography.