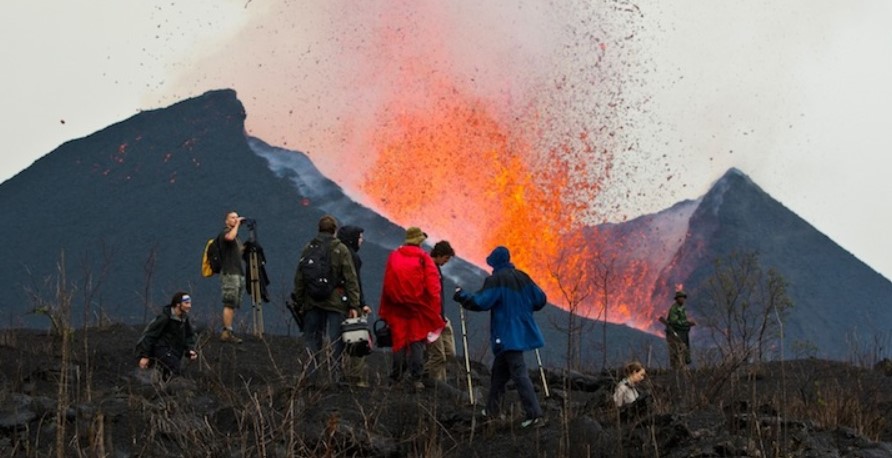 There has been many eruptions from the flanks of the volcano which created many new smaller volcanos that live for a short period of time. Nyamuragira mountain is part of the eight volcanoes found in the Virunga mountains and among the three active mountains in the Virunga massif.

Nyamuragira is an active Volcano near the city of Goma in the Democratic Republic of Congo situated about 25 kilometers (16miles) North of lake Kivu. The Volcano is in the north Kivu province and 13kilometers (8.1miles) north north West of Nyiragongo the volcano which caused extensive damage to the Goma city in the 2002 eruption.  Nyamuragira mountain is a volcano of 500 cubic kilometers (120 cubic miles) and covers an area of 1500 square kilometers (580 square miles). The mountain has a low shield profile and contrasts with adjacent steep sides.

Nyamuragira mountain is responsible for the large portion of the Sulphur dioxide released into the atmosphere and the volcano is 3056 meters high covering 1500 square kilometers of the East African Rift and has come as far ad 30kilometers from the Volcano.

Nyamuragira is also known as Nyamulagira and is a shield volcano where lava has erupted spectacularly from a fissure low on one of the volcano’s flanks and spilled north wards away from the populated areas.

According to the Volcano observatory the Nyamuragira volcano erupted on 8 May 2004 at 05:48 local time and the lava flows remained within the national parks boundaries, ash fell in several villages on the west and north flanks of the volcano. The mountain also emitted a large amount of Sulphur dioxide into the atmosphere.

The lava from the 2010 eruptions flows and is seen on satellite pictures that reaches 25 kilometers south west of lake Kivu its in the north west 22kilometers and north north east 35kilometers.

The 2016 scientific study shows that rhe lake at the bottom of the inner part of the Caldera had recently disappeared and the cause of it isn’t yet known but gases were being released from the lava lake.

In 2014 June to August there were a formation of the new lava lake which occurred with the depth of 500 meters which continues to grow and will form lava flows in the future. And Nyamuragira is one of the few volcanoes which have kept the lava lakes for years.

The best time  to visit Nyamuragira mountain in the dry season which supports easy and favorable hiking conditions. The trails will be dry thus making hiking convenient. In order to avoid and dodge the slippery steeps, muddy trails and too much coldness then you should visit in the months of December, January, February,  June,  July and August. June and July are most dry months.

When you visit Nyamuragira mountain always expect to spend the night so you will be using the facilities in the Virunga national park. And here are some of them Mikeno lodge, Bukima tented camp, Kibumba tented camp,  Lake Kivu lodge, Tchegera island tented camp, Lulimbi tented camp among others.

Apart from hiking on Nyamuragira volcano there are other activities you can take part in like gorilla trekking, hike on mountain Nyiragongo, Chimpanzee tracking and habituation was introduced in Virunga national park in 2016, Birding and birds like the Olive legion, Olive woodpecker, Kivu ground thrush, speckled mouse bird, black bee eater, black kite, blue headed coucal, paradise flycatcher among others, boat canoeing on lake Kivu, wildlife and primate viewing, game viewing and the cultural tours.

Hiking on mountain Nyamuragira requires you to have purchased a hiking permit which costs 300dollars and the minimum age to which the permit is sold to is 12years. And hiking starts very early in the morning after a briefing and its at this time you get to meet up with the guides, rangers and porters. Hiring a porter is in between 15dollars to 25dollars. A Nyamuragira hike starts at Bukima ranger post and takes about 3 to 4 hours to reach the summit. And hikers who wish to spend the night there are bungalow built at the top of the mountain which cost 300dollars per night.

Nyamuragira mountain can easily be accessed from Kigali and takes about 2 hours to reach Goma town in DRC then continue to the north of Lake Kivu and then reach the volcano.