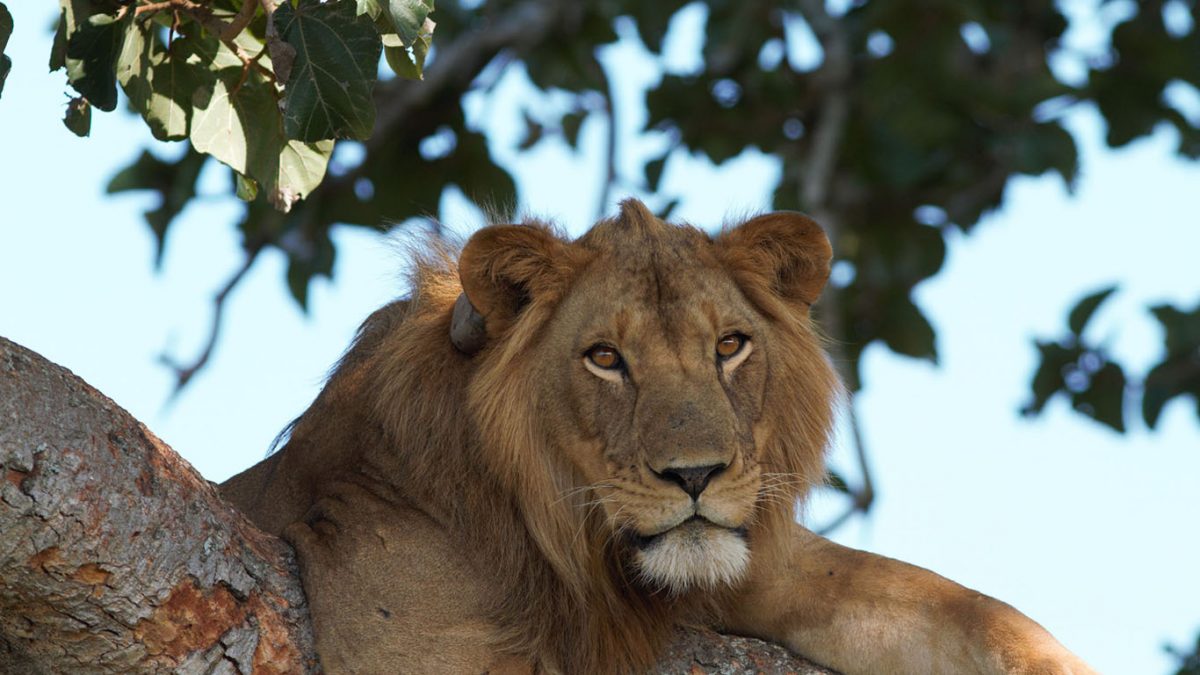 For those who are interested in seeing them, you will have to comfortably leave your comfortable lodges and travel to the Ishasha sector for the game drives in the afternoon and sometimes in the evening. This is where you will get an opportunity to see and enjoy the tree-climbing lions. This is a unique experience as some people don’t believe that the lips do climb trees.

It is not that lions can only be found in Queen Elizabeth National Park, but there are other national parks where you can find lions, and these include the Murchison Falls National Park, Kidepo Valley National Park, and other destinations. However, for these lions in this park, they don’t climb trees.

Why lions in Queen Elizabeth do climb trees?

Lions are often spotted climbing trees and this has been attributed to several reasons, which include, among others that lions are always running away from the creepy crawly nibbles. During the windy season, the ground is usually affected by rearing tsetse flies, which bite the wild occupants, including lions, especially the cubs, and thus the only way to ensure their safety is to run to the tree. Additionally, the temperature variations have led to the lions adapting to climbing trees in Queen Elizabeth National Park. Lions climb trees in order to run away from the sweltering temperatures on the ground. The temperatures in the savannah and in the Kasese area, where the equator is found, are about 28 degrees Celsius, or 80 degrees Fahrenheit, when the seasons change. For the felines, this heat makes the ground extremely scorching. Fortunately, they find places to relax after that point, race through the tree limbs, and lastly, the lions can easily see their prey when they are climbing the trees. The fact that the grass is tall and they can clearly see the predators this justified the reason

The wide-extended (candle holder) trees located in the sovereign Elizabeth public park are a favorite of the climbing lions. Sycamore fig trees and acacia trees are among these trees. This type of tree is good for lions during the stormy season since it provides a comfortable wide location for resting. They cannot properly see them properly and, thus, they resort to tree-climbing.

Tree climbing lions are the justification for the popularity that the southern piece of Queen Elizabeth National Park that is the Ishasha sector gets from the world’s travel industry. The tree climbing lions draw thousands of sightseers from one side of the planet to the other to the public park. They are a star fascination and a stunning encounter for travelers that visit East Africa.

The sycamore fig trees and the acacia trees are the usual trees that the tree climbing lions ascend at first light, with the exception of when the sun rises. The male lions of Queen Elizabeth have dark manes. Seeing the outstanding, one-of-a-kind lions of Queen Elizabeth is a once-in-a-lifetime experience you will never forget, especially if you take enough images back home of them lying lethargically on tree limbs or catching their meal.

The other parts of the Queen Elizabeth National Park, other than the tree climbing lions, offer strikingly picturesque perspectives on a genuine wild life, from the running heaps of Ruwenzori, otherwise called piles of the moon, to the wonderful hole lakes encompassing the recreation area, including new water bodies like Lake Edward and George, connected by the energetic Kazinga channel, smoothed out with many hippos, crocodiles, and elephants playing with water around early afternoon, to the staggering kyambura George, where chimpanzees can be clearly and well seen, as well as the distant fishing towns to be visited and cooperate with local people and get engaged with nearby moves and check in their gift looks for privately made artworks to reclaim home. Please come and book with us for a better safari experience.