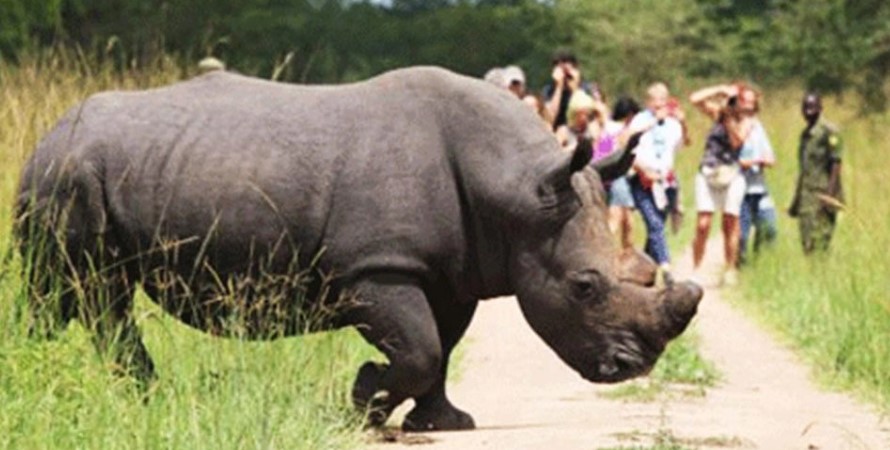 The big five mammals were used by the conservancy to refer to the animals that are not easily attacked by poachers in the wild, and they are not very easily targeted by poachers. This is the best place where you can explore all kinds of animals, and it is best used by tourist operators when marketing Uganda as a tourist destination.

The Murchison Falls National Park is managed by the Uganda Wildland Authority and is found in the northwestern part of the country, spanning the districts of Bulisa, Hoima, and Nwoya. It is the biggest national park in Uganda, covering about 4000 square kilometers. To get to Murchison Falls National Park, drive north-west from Kampala, Uganda’s capital city, via the Kampala-Gulu highway, and you’ll be there in about 5 hours. The park features more than 76 species of mammals and over 400 species of birds, including migratory and endemic bird species. The presence of the valid ecosystem has made the country the most visited and the leading national park in Uganda with various animals such as baboons, monkeys, leopards, lions, antelopes, duikers, and sitatungas.

With the safaris to Murchison Falls National Park, you will see the big five animals, which are discussed below.

The elephants are the biggest animals on the planet and they are regarded as the American Elepehenets because, by the close look of their ears, they may look like the American continent’s map, hence the origin of the African elephants’ name. The African elephant can weigh around 5000 kilograms and grow up to 14 ft. in height and 30 ft. in length. These animals in Africa mostly live in the savannah area and the forested areas of the Murchison Falls National Park. At that time, you will see them in big herds in the Murchison Falls National Park, and, surprisingly, it is always the female elephants that lead the herd. These animals are calm, but they are very dangerous when disturbed. They protect their young ones very well and they spend most of their time eating, so they can live up to 70 years, provided they are freely enjoying their wildness.

Leopards in Murchison Falls National Park. Leopards are the most solitary mammals in Uganda, and they move alone in the wild. The largest leopard can weigh up to 60 kilograms, and they can be found in several habitats, just like lions. They can be found in shrubs, savannahs, and even climbing acacia trees. Leopards can camouflage, and they can hide in the grass and wheat until their predators come. They run very fast as compared to the lions, and they can move alone, but they come together during mating and when they are raising the young. This is the time when you can find leopards in a pair. They belong to the feline family, and they are nice looking. They want to be seen by tourists while carrying out their safari.

African capped buffaloes. Murchison Falls The African-capped buffaloes also call the national park home. These animals have the most powerful hones, which protect them, and they are the most endangered animals in the wild. These buffaloes can be seen moving even in the group of about 100 buffaloes with calves, and I do not have any documented history of these animals being domesticated. Murchison Falls buffaloes in Murchison Falls National Park can be seen in large groups or herds, and they are most often seen in the Paraa region while tourists are on game drive safaris. While they are mooching, they focus their attention on protecting their young ones against predators. When the old male buffaloes become old, they are chased from the field, especially when they no longer manage the work of the herd.

Lastly, we talk about rhinos. Uganda has got white rhinos, and these can only be spotted on your way to Murchison Falls National Park in the Ziwa rhino sanctuary. As a result, poachers took advantage, killing all of Uganda’s rhinos.

However, the Uganda government governed with the Rhino Fund, and Uganda reintroduced the rhinos, which are kept in the Ziwa Rhino Sanctuary in Murchison Falls National Park. Rhinos have the strongest sense of smell and can live for up to 50 years. Rhinos don’t require much sunlight, which is why they are usually spotted in the mud. Rhinos are still critically endangered in Africa.