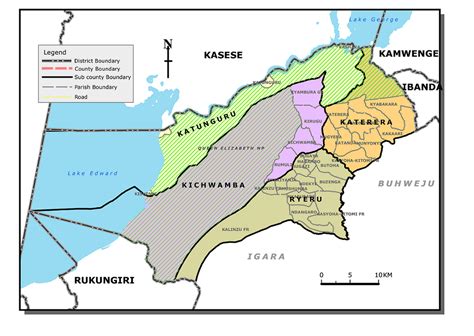 Queen Elizabeth National Park is located in the Rubiriz district, and the Rubirizi district is curved away from the Bushenyi, and it has got its headquarters that are found in Bunyaruguru. Other than being part of the main national park, Rubiri District also features other important attractions, and these include the Kasyoha Kitomi Forest and Maramagambo Forest Reserves, which are famous for chimpanzee tracking.

These forests form the main attraction of the whole Rubirizi district. As identified above, over 784 square kilometers of the Rubirizi district are covered by forest. This implies that the majority of Rubirizi geographical landscapes is some show of determined or dominated by attraction, especially the forest reserves.

Things to see in Rubirizi district

Rubirizi, the district, has some of the attractions that you can see if you decide to explore it.

It is also important to note that Kyambura gorge is found in Rubizi district, in the same sub county as Kirungu subcounty. While in the Kyambura gorge, you will see clearly the views of the Queen Elizabeth National Park; this is the major attraction in Rubirizi, especially for visitors who are interested in chimpanzee trekking.

Additionally, the Magambo sun county in Rubirizi district is where you’ll be able to explore the Maramagambo forest. The forest facilitates the forest nature walk safaris and the major attraction in the Maramabago forests is the presence of the Bat Caves and Pythons. This is very wonderful and interesting. Come and enjoy the safari experience in the Maramagambo forest in the Rubirizi district.

Remember that the Katungulu subcounty is also found in the Rubirizi district. This place is majorly occupied by the fishing villages and several communities, including the crater lakes. Queen Elizabeth National is found in the Katungulu subcounty in the Rubirizi district. The fishing villages and the Katunguru Bridge, which is sometimes where the boat cruise on the Kazinga channel begins, are among the attractions here, and this adds to the safari’s appeal.

Where to stay in the Rubirzi district

There are different accommodations that are found within the Rubirizi section of the Queen Elizabeth National Park, and the accommodations are available because the places are frequently visited by the visitors, and this is good to ensure that the visitors get their maximum satisfaction. It is fascinating to see the lodges associated with the Kichwamba, such as the buffaloes, Nyamusingiri lodge, Ishasha camping sites, Maramagambo camping sites, and the King Fisher Lodge.

While visiting the Rubirizi district, you will encounter many of the facilities, including the wonderful terrain of the area, which is so spectacular. Natural wildlife walking safaris in the Maramagambo forest are so fascinating and wonderful. You will stay at some of the best and most wonderful safari lodges as well as at the camping sites welcoming campers.