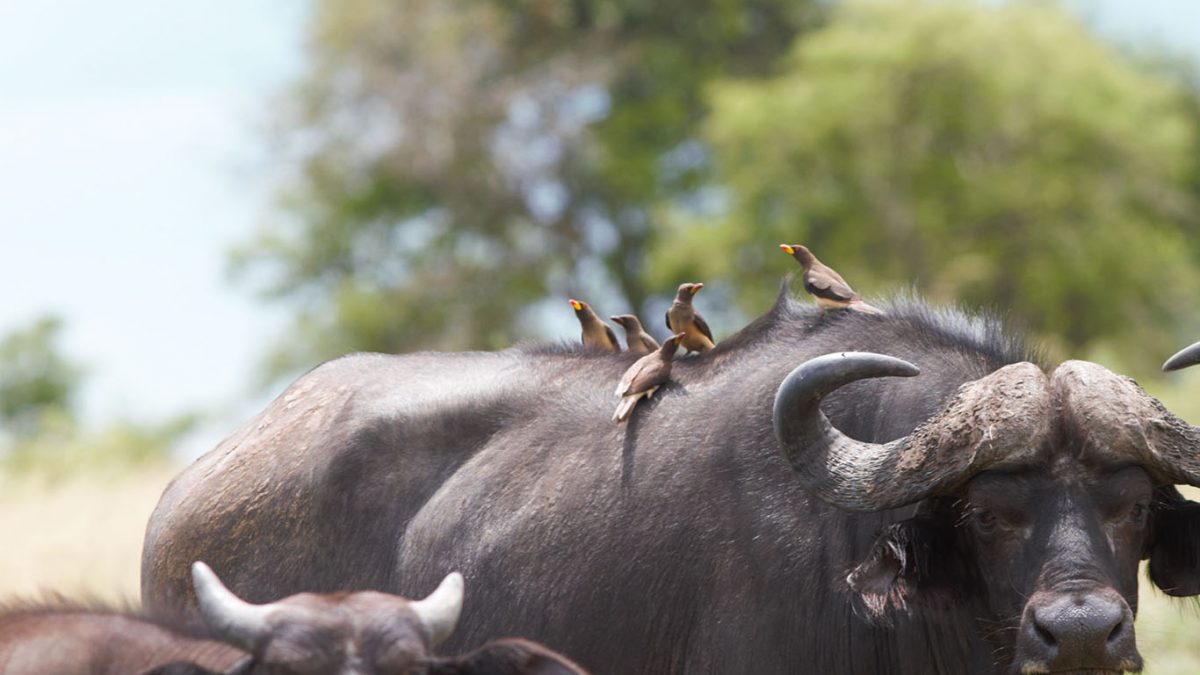 There are more than 95 species of mammals and these include the big 4 animals that are found in the wildness among the great animals of the queen Elizabeth National Park, including the hippos, buffaloes, elephants, leopards and the king of the jungle call them lions. Other animals that can be seen within the Queen Elizabeth National Park include the Uganda kobs, the waterbucks, warthogs, bushbucks, the hyenas, and the Nile crocodiles among other animal species without forgetting the Ishasha tree-climbing lions. All these animals can be seen by indulging in safari activities such the game drives in the Kasenyi plains, the boat cruise safaris on the Kazinga channel where you will get a chance to see wild animals in plenty.

Still while on the Uganda safari in Queen Elizabeth National park you will get a chance to drive to Kyambura gorge and engage in chimpanzee tracking. The Kyambura gorge is rich in primate species and it is covered by the vast forested vegetation as well as the savannah vegetation, indeed queen Elizabeth National Park is the medley of wonders with a lot of attractions that you will discover while on the Uganda safari. In the Kyambura gorge other than chimpanzees, you will find other monkeys to view are blue colobus monkeys, velvet monkeys, and much-contrasted monkeys. Birds and beautiful butterflies abound in Kyambura Gorge, and the atmosphere is quite mysterious beneath the trees.

Afternoon boat cruise on the Kazinga channel while on the Uganda safari is so credible and its widespread experience that you will live to remember while in Queen Elizabeth National Park. While you’re engaging yourself on the boat cruise safaris, you will get a chance to enjoy a lot of the wildlife that comes along from the park to drink water. On your boat cruise on the Kazinga Channel in Queen Elizabeth National Park expect to see a lot of the animals that include hippos, the huge Nile crocodiles, and several species of birds which you will be able to see such as the pied kingfisher, the francolins, great cormorants, pelicans, the Egyptian geese, the African fish eagle among other bird species

While on the Uganda safari in Queen Elizabeth National Park, you will get a chance as well to take part in experiential tourism, and here you will join the researchers who will lead you into the wildness to study several animals. In this case, the most animals that visitors see during this wonderful research safari are the lions.

The lion tracking experience in Queen Elizabeth National Park produces a magnificent experience whereby you will see the animals close to you as you take photos and learn more about the behaviors of the lions in the wildness. The lion tracking experience is aided by the radio callers that the lions do bare and thus the researcher’s tracker the radio callers by the use of the GIS until you reach where the lions are. The other animals that you can explore during this experience include mongoose tracking, taking part in the hippopotamus census in the queen Elizabeth National Park and all these provide the visitors with a wonderful experience.

Still, as you kick start your Uganda tour in Queen Elizabeth National park, you won’t finish your Uganda’s safari without making visits to the local people in the villages and communities around the queen Elizabeth National Park features a lot of communities that provide the visitors with enough cultural experience. Visitors can explore the Katwe community and learn more about their livelihood, the Kasoga community is the best in offering the visitors a clear community experience, Kikorongo women group are also good and interesting for you to explore the culture and the ways of life of the people and what they do to earn a living. By visiting them, you will be giving back to them and hence they will more support the conservation efforts.

We can conclude by saying that Queen Elizabeth National park is the best destination in Africa where you can go and full fill your travel dream to African wildness. The park is surrounded by both budget and upmarket accommodation facilities which are near starting points of most safari activities and you will choose a lodge according to your safari budget. Trust us as we take you to Uganda’s tour in reference to Queen Elizabeth National Park.