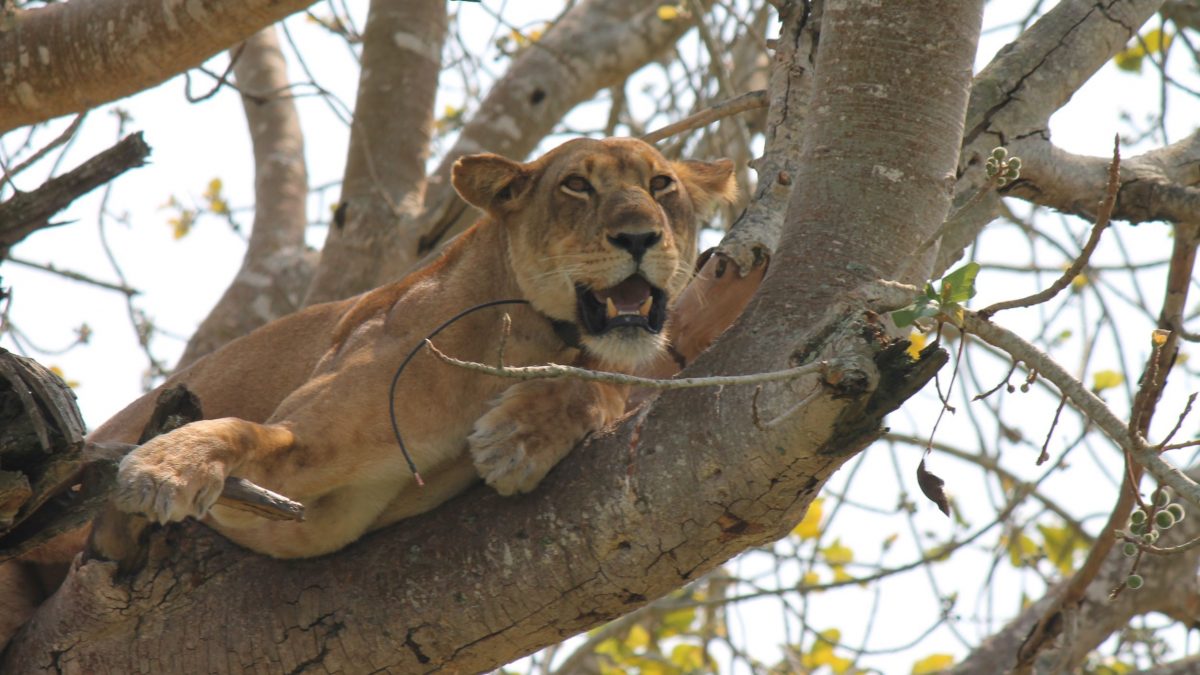 Do you know that lions can climb the tree? If you’re doubting this just pack your belongings and have the Uganda safaris and learn more about Uganda’s tree-climbing lions. The tree-climbing lions are found in Queen Elizabeth National park which is among the oldest National Park in Uganda located in the western part of Uganda about 6 hours’ drive from Uganda’s capital Kampala. Queen Elizabeth National Park is known as the medley of wonders and this has been so because of the variety of biodiversity that the park protects. The park features the major two rift valley lakes i.e. lake George and Lake Edward and these are both joined by the long channel which is known as the Kazing channel, the park spread to several districts and these include the Rubirizi district, Kasese district, Kamwenge, and Rukungiri districts all these parks have a share on Queen Elizabeth National Park.

The park has recorded mammals that are close and more than 95 animals as well the more than 600 species of birds. Among the animals that the park has included the big four animals which are known to be lions, leopards, buffaloes, and elephants. Other notable animals of the Queen Elizabeth National Park include Warthogs, bushbucks, waterbucks, hippos, crocodiles, Uganda kobs, side-striped jackal, 10 primate species including chimpanzees, red followed monkeys, high contrast colobus, vervet monkeys, north of 612 bird species including African jacana, pied kingfisher, African fish falcon, squacco heron, wattled plover among others.

Visitors can see the tree-climbing lions only when they visit then queen Elizabeth National Park and enjoy the game drive in the park. There is a various reason as to why the lions do climb the tree and these have been attributed to several reasons including escaping from the small insects, seeing their prey when they are up in the trees, at time head is always so much on the ground and they decide to climb trees and to find the shelter within the trees. These reasons justify why the lions of Ishasha in Queen Elizabeth National Park do climb trees.

When can the tree-climbing lions be easily seen?

The tree-climbing lions of the Ishasha can be seen any time and are available all year round. Some visitors have seen them in the morning, others in the afternoon while others have seen these animals in the evening and every day. However, these lions can be easily seen when there is dry and there is a lot of sunshine not really in the wet season. In the afternoon and when the sun is too much, the lions climb the trees to look for the shelters and thus the afternoon period is the best time for you to do the game drives in Ishasha to increase your chances of seeing the tree-climbing lions. The dry season is the greatest time to witness the climbing lions because access roads to the Ishasha area are passable, as opposed to the wet/stormy season when the roads are closed. The lions avoid climbing trees during the rainy season since it is dangerous due to the heavy rains, but it is an excellent time for bird watching.