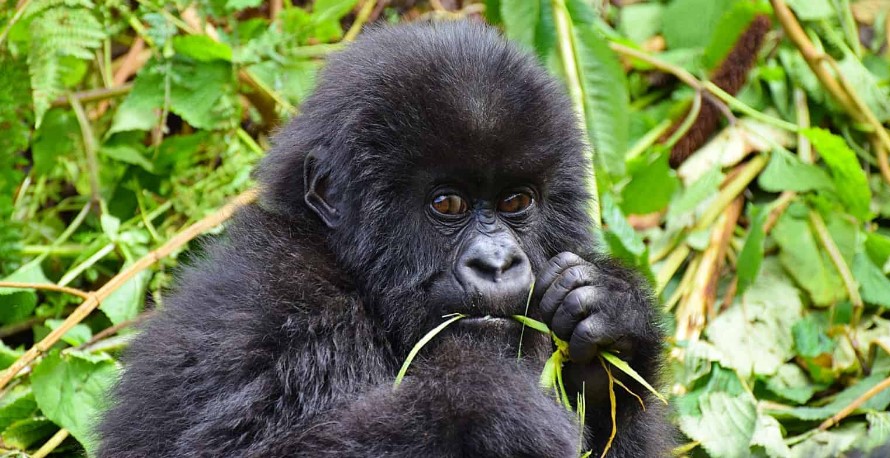 Mubare gorilla family, this has 9 members including the sliver back gorilla as the leader. Mubare gorilla group is the oldest habituated gorilla group in Bwindi park and was found in the Mubare hills deep in the Bwindi forest therefore gets its name from where it was found and was fully habituated in in 1995. First started with 12 family members led by the dominant silverback Ruhundeza who died due to fights  with other wild gorilla groups. Later was joined by another silverback gorilla known as Kanyonyi.

Habinyanja gorilla family, has 17 members inclusive of the silver back. In 1999 it had 25 members when it was first habituated but due to the struggle for power amongst the several silver backs the group ended up splitting up up and this family group is led by the shrewd alpha female called Makara. Tracking this family requires about 3-8hours visitors are advised to lodge in Buhoma area.

Rushengura family group, has 17 family members including 1 sliver back, 4 black backs,  4 adult females, 4 juveniles, 4infants and is headed by Kabukojo. This group is as a result of the splitting up of the Habinyanja family. Rushengura family started with 12members with 5 females and got its name from a tree specie which was abandant in the home area known as “Ebishengura” Trekking this gorilla family takes a shorter time therefore those who want a short trek can choose to trek this family.

Muyambi gorilla family, comprising of the 7 members headed by one silver back and it’s the newer mountain  gorilla family in Buhoma region of Bwindi Impenetrable National park opened up early 2019. Muyambi gorilla was an adult family member of the Mubare gorilla group who split away from the Mubare family and created the Muyambi family and got the name from the founder of the family.

Ruhija gorilla sector of Bwindi has 3 gorilla families and these include; Bitukura gorilla family with family size of 13 members , 4 silver backs, 4 adult females, 2 juveniles, 3 infants  and is headed by Ndahura. This Gorilla family was named after a river the family members were first sighted in July 2007. This family has a close bond an oftenly  have group meetings. Initially it was a group of 24 members due to the disputes amongst the members and some chose to leave and make new families. Bitukura family group likes foraging around Ruhija tourism of Bwindi Impenetrable National park and sometimes along the forest edges in the area.

Oruzogo family group has 17 members having 2 silver backs, 2 black backs, 2 adult females,  2 sub adults, 1 juvenile and 5 infants  headed by Bakwate. Oruzogo family like foraging and feeding on vegetation dominated by Alchornea hitela plant(locally known as Oruzogo) and it derived its name from it. Its one of the most popular families the tourists not because of the size but playful and energetic juveniles and infants in the group.

Kyaguliro gorilla family, is a family size  of 10 members headed by Silver back known as Rukara,  2 black backs,  3 adult females, 2 juveniles an 2 infants.Kyaguliro family is mainly for Research and its habituation began in 1995. Following the sudden death of the family head Rukina  an later headed by a young silver back Mukiza who was later ambushed by an immigrating adult silver back Rukara from the Bitukura family. In 2016 two groups were made Kyaguliro A under Rukara and Kyaguliro B under Mukiza. Kyaguliro family is known for spending most of its time in the inner forest and rarely gets close to the forest peripherals.

Mukiza gorilla family has 10 members,  1 silver back head known as Mukiza, 4 adult females, 1 sub adult and 4 infants. This family was under Kyaguliro family under leadership of Rukina and is of as a result of the splitting after Mukiza being ambushed by Rukara. Mukiza walked away with a few members and made his own.  Nkuringo gorilla sector has the following gorilla families;

Nkuringo gorilla family  having 11 members , 2black back, 2 adult females,  2 sub adults, 3 juveniles, 2 infants and is headed by the Rwamuture a black back. This family got its name from a hill where they were first found and it’s the fist group to be habituated in the southern are of Bwindi Impenetrable national park after 2 years habituation process in 1997. Nkuringo was led by one sliver back who died in 2004 leaving behind 2 silver backs Rafiki and Safari. Safari took over power and  that same year the family got twins Katangi and Muhuzi unfortunately one passed away. Then Rafiki took power unfortunately was killed by the poachers in 2020. Tracking the Nkuringo requires abit of more energy and stamina.

Bushaho gorilla family has 8 members having 1 sliver back head as Bahati, 1 black back, 3 adult females, 1 sub adult, 1 juvenile and 1 infant. Bushaho is as a result  of those who walked away from the Nkuringo family inclusive of the leader Bahati. This group was later habituated and given a name Bushaho. Nkuringo gorilla sector has other two mountain gorilla families including the

Christmas gorilla family and the Posho gorilla family which is still habituation. Rushaga gorilla sector has 5 mountain gorilla families including the Nshongi gorilla family has 10 members 1 silver back, 1 sub adult, 2 juvenile, 3 adult females and 3 infants headed by Bweza. In 2009 Nshongi family was officially introduced and was the largest group ever habituated with 32 members,  named after River Nshongi were they were first sighted. It had 4 silver backs and 7 black backs but lived in harmony. In 2010 the group split and remained with 26 members. Those who left forming the Mishaya gorilla family. Unfortunately Mishaya silver back died in 2014 which led to the dispersal of some of the members joining the Bweza family while others joined the Bikingi family. In 2013 the Nshongi family further split and reduced to 18 members  those who left formed the Bweza family.

Bikingi gorilla family has 15 members 1 silver back, 5 adult females,  2 sub adults, 2 juveniles, 5 infants. Habituation process of the Bikingi started in early 2012 as a follow up exercise of the Mishaya family displacement and several members from the Mishaya family were located in the group along side other non habituated members.

Mishaya gorilla family has 12 members 3 infants, with one dominant silver back. In July 2010 Mishaya silver back decided to leave Nshongi family with some females and started his own family. He managed to gather other females from the non habituated groups since he was a fighter. In 2014 Mishaya died and t affected the group as he was the only male in the group.

Kahungye gorilla family has 17 members 3 silver backs, 3 black backs, 3 adult females, 3 sub adults, 3 juveniles,  2 infants  and is headed by Rumanzi. This gorilla family gets its name from the Kahungye hill where they were found. In 2022 it was opened for visitors and tracking. It consisted of 29 members including 3 silver backs later on the family split due to intra male rivalry the creating the Busingye gorilla group.

Busingye gorilla group/ family has 9 members still headed by the founder Busingye who split from the Kahungye family. Busingye family is known for foraging with in the inner forest and very rarely comes towards the edge of the park.

Bweza gorilla family having 12 members  2 silver backs,  4 black backs, 2 adult females, 1 sub adult and 2 infants. Bweza family comes from the Nshongi family that used to be the largest ever habituated in Bwindi park. Due to the silver back Mishaya’s decision to leave the group,  h left with some members and formed the group. Then Bweza who was among those who left chose to walk away with other 6 members towards the end of 2012 to be independent from the Mishaya family  thus creating Bweza family group.

2) Mountain Gorillas in Bwindi Impenetrable Forest Park feed on vegetation, fruits and leaves. Therefore they can spend almost the whole day eating. Mountain gorillas in Bwindi their diet is high in fruits compared to those in the Virunga mountains says Craig Stanford.

3) During the night mountain gorillas sleep together in the nest either on the ground or up in the trees. Infants share the nests with the mothers.

4) Since we share the same DNA with the mountain gorillas they have a close relation to the humans. The dentition is 32 teeth, develop large, strong and big sharp teeth when the mature. During their infant stage they develop milk teeth which is replaced by the permanent teeth the same type of set with the humans’.

5) Mountain gorillas arms are longer than the legs,  they have about 30cm arm span and upper body is 6 times powerful than that of the humans. The muscles in the arms are larger than those in the legs because they use their arm strength for gathering, lifting and bending objects.

6) Mountain Gorillas in Bwindi Impenetrable Forest Park have unique patterns of wrinkles on their nose(nose prints) thus have the clearest nose prints.

7) Mountain gorillas have a standard height of  4-6feet and weigh between 136-220kgs. 8) Mountain gorillas have thicker fur and these enable them to live in a habitant where the temperature often drops to the freezing point and also mountain gorillas don’t have tails. Since Bwindi Impenetrable has 11 primate species mountain  gorillas being the most popular there are other primates that live along in the park and these include; Chimpanzees,  Red tailed monkeys,  L’Hoests monkeys, Blue monkeys, black and white colobus monkeys, Baboons and other ape species like Potto, Demidoff’s Galago and Galago. For one to catch a glimpse at these impressive primates secure yourself a gorilla trekking permit. Other attractions that can be seen during gorilla trekking are wildlife species like the forest elephants, forest hog among others, bird species like Handsome Francolin, black bee eater among others butterfly species, tree species other flora and fauna.